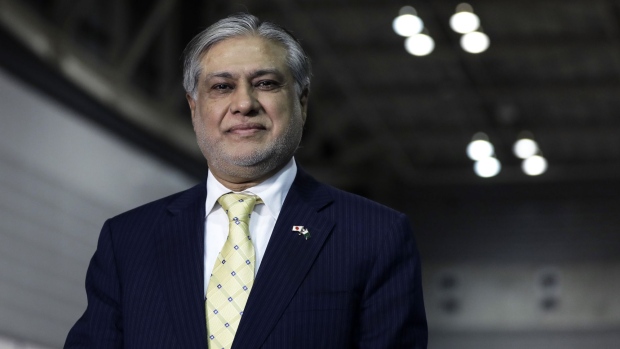 (Bloomberg) -- Pakistan’s new finance minister Ishaq Dar has vowed to defend the sinking rupee and reduce interest rates to pull the country out of an economic crisis marred by high inflation and low foreign exchange reserves.

“Our top priority is our currency. The level it has reached is not its rightful place,” Dar told reporters on Wednesday soon after taking charge. Pakistan isn’t moving out of a market-based rupee rate but we will not allow speculators to play with the rupee, he added.

The South Asian nation’s currency has dropped by a third this year and among the worst performers against the US dollar globally, but Dar, who is known for his preference for a stronger currency, is stoking hopes of a reversal.

The rupee has gained 3.1% since he was nominated for the post. During his last stint as finance chief, Dar managed to keep the rupee as the most stable currency in Asia between 2014 to 2017, according to data compiled by Bloomberg.

It is unclear though how Dar’s approach to support the currency will be aligned to the International Monetary Fund’s prescription of a flexible, market-determined currency.

“The new finance minister appears to have a different perspective on how to manage the economy, one of which involves a potentially more managed currency,” said Johnny Chen, a money manager at William Blair Investment Management, which owns the nation’s bonds, “We are more cautious on Pakistan assets because of uncertainty right now around future policymaking, and await more details.”

Pakistan is facing “deep economic challenges,” Dar said, adding that those will be tackled like they were in the past.

The sixth finance chief since August 2018, he faces a multitude of challenges, including low growth, high inflation and foreign-exchange reserves standing below the standard benchmark of three months of imports. The South Asian country is also scheduled to repay a $1 billion sovereign bond in December.

Pakistan gross domestic product is estimated to halve from 5% in the fiscal year ending June following the floods. Its central bank has also raised rates by 525 basis points so far this year to tame prices that have risen for six straight months and hit a 47-year high of 27.3% in August.

“Our second priority is to bring down inflation and the interest rates,” Dar said. The nation is facing imported inflation because of rupee devaluation, he added.

Pakistan secured a $1.1 billion loan from the Washington-based lender in August to avert an imminent default, but the deadly flooding took away lives and livelihood, and led to damages of around $30 billion. It has now made an urgent appeal for debt relief from rich nations to support the already fragile economy.

A tough political environment could also add to challenges to adhere to some of the key IMF conditions amid calls for fresh elections and rising public anger due to higher prices.