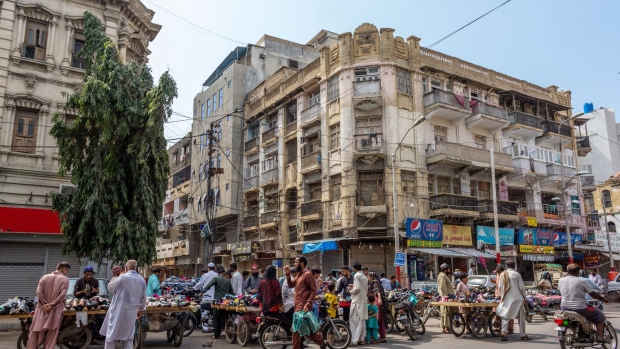 Street vendors set up outside closed stores in Karachi, Pakistan, on Sunday, Sept. 19, 2021. Pakistan's central bank is expected to hold its key interest rate for a seventh straight meeting even as an economic recovery from the pandemic is fanning Asia's fastest inflation. , Bloomberg

(Bloomberg) -- Pakistan unexpectedly raised its benchmark interest rate by a full percentage point to prevent stronger-than-anticipated inflation from spiraling out of control.

State Bank of Pakistan increased the target rate to 16% on Friday, a move expected by just one of 44 economists in a Bloomberg survey while the rest had predicted no change. The authority also raised its annual inflation forecast to 21%-23% from about 18%-20%.

“Inflationary pressures have proven to be stronger and more persistent than expected,” the central bank said in a statement. The tightening “is aimed at ensuring that elevated inflation does not become entrenched and that risks to financial stability are contained, thus paving the way for higher growth on a more sustainable basis,” it said.

Higher interest rates add another layer of complexity to the challenges facing the South Asian nation, which is still to fully assess the damage from devastating floods. The delay is also holding up a loan disbursal from the International Monetary Fund. Meanwhile ex-premier Imran Khan is holding street rallies to force early elections.

Khan’s Showdown Protest in Pakistan to Put Investors on Guard

In the short term, the economic outlook looks bleak. Pakistan’s foreign exchange reserves cover about one month of imports, less than the IMF’s three-month benchmark. Inflation rose more than expected to about 26.6% in October. The rupee could weaken by 10% in the coming months, according to Mackay Shields UK LLP and Tellimer Ltd.

The nation is arranging funds and plans to repay a $1 billion sukuk bond on Dec. 2, central bank Governor Jameel Ahmad said at a briefing Friday. He said repayment needs in the year started July 1 total about $25 billion, with most of it rolled-over or paid.

Ahmad added that the SBP will monitor price pressures.

“Amid the ongoing economic slowdown, inflation is increasingly being driven by persistent global and domestic supply shocks that are raising costs,” the SBP said. “In turn, these shocks are spilling over into broader prices and wages.”

--With assistance from Khalid Qayum and Ismail Dilawar.

(Updates with details, governor comments throughout)