Palantir Technologies Inc. is wrapping up its best week since it went public in September, adding about US$19 billion in market value as a broad rally in tech stocks helped fuel gains in the software maker.

Its shares have added almost 60 per cent since Monday to trade as high as US$33.50 earlier on Friday, a fresh record. The stock pared some of the gains after Citron Research said in a tweet it was shorting the stock with a US$20 target.

Palantir representatives didn’t immediately respond to a request for comment.

“A lot of institutions have probably warmed up to the company and are viewing it as something to hold onto for the long term,” said Wayne Kaufman, chief market analyst at Phoenix Financial Services. “It’s a great software company, and it has a terrific business, a very sticky business, not just with governments but also enterprises.”

Trading in Palantir options also surged this week with average daily volume of call contracts jumping about 250 per cent in the first three days of the week when compared to the prior week. An analysis of open interest shows most of the contracts being opened and closed in the same day, indicating a heavy presence of day traders. 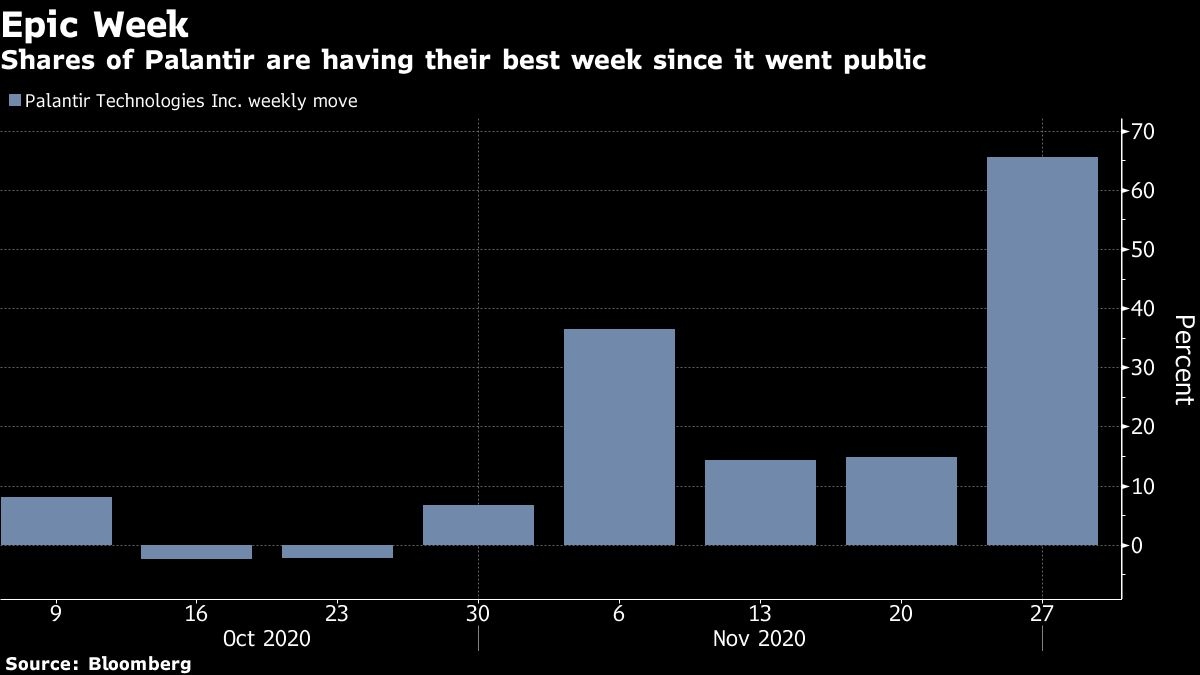 “Big-data companies have become very important and historically have been excellent stocks. Also, Palantir is benefiting from the pandemic -- tracking cases and analyzing data is right in its wheelhouse,” Kaufman said.

Since starting up in 2003, co-founder and chairman Peter Thiel has helped bankroll the business throughout its long period as a closely held business. Now, the stock has gained nearly 300 per cent since its direct listing. It reported third-quarter losses in its first financial results since going public as compensation costs surged. It did, however, boost its revenue growth forecast for the year to 44 per cent, exceeding the amount analysts expected on average.

The shares currently have one buy, five holds and one sell with an average 12-month price target of US$14, according to data compiled by Bloomberg.