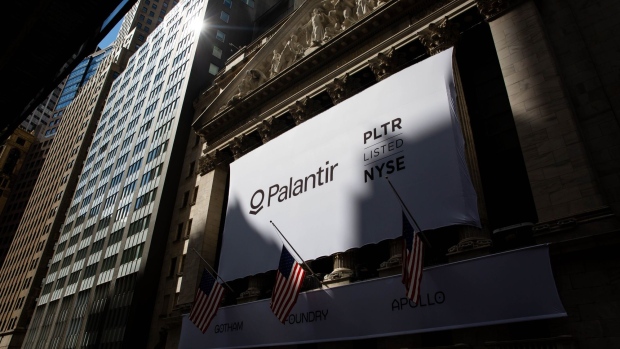 Palantir Technologies Inc., in its first financial report since going public, said it expects sales growth to slow next year. The stock fell about 7 per cent in extended trading.

The company, which sells data analysis tools to governments and companies, said revenue growth would exceed 30 per cent in 2021. At the same time, it boosted the forecast for this year to 44 per cent, totaling US$1.07 billion, just exceeding the amount analysts expected on average, according to data compiled by Bloomberg.

Palantir also increased its forecast for an annual adjusted operating profit, excluding stock-based compensation and other expenses, of US$130 million to US$136 million.Since starting up in 2003, Palantir has operated with little attention to profits. Peter Thiel, the co-founder and chairman, helped bankroll the business throughout its long period as a privately held business.

The Denver-based company, which makes software to manage and analyze data, has seen demand surge during the coronavirus pandemic. Operation Warp Speed, the Trump administration initiative to deliver vaccines to Americans, uses Palantir, as do various health agencies in the U.S. and around the world. The company told Bloomberg Businessweek it signed more than 100 deals in the first few months of the pandemic.

Palantir has been tightly associated with President Donald Trump. Thiel donated to Trump’s campaign in 2016 and spoke in support of him when he was nominated as the Republican candidate. But investors are optimistic about Palantir’s prospects since Joe Biden was elected president. The stock is up 39 per cent since Election Day.

Biden is expected to cut military spending, which could benefit cheaper, ready-made options like Palantir’s, according to Mark Cash, an analyst at Morningstar. “The company has been a U.S. government contract award winner in Democratic and Republican administrations,” Cash wrote in a note to clients.