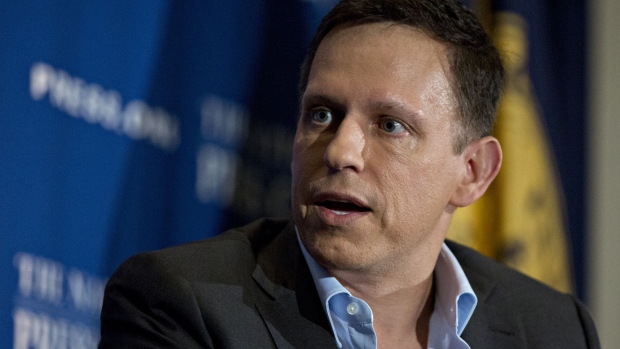 The banks’ funds have cut their valuation of a minor stake in the secretive data-mining company several times in the last two years, estimating the company’s worth at just $4.4 billion as of June 30. That’s well below the appraisal of several other investors in the firm and just one-ninth the valuation Morgan Stanley’s own bankers predict the company could fetch in an initial public offering.

The conservative estimate on a tiny stake has long rankled Palantir Chief Executive Officer Alex Karp and his colleagues, according to people familiar with the situation. So in recent weeks Palantir tried to strike a deal: It attempted to buy back all of its stock held by Morgan Stanley’s mutual funds, ending the valuation squabbles, according to people with knowledge of the discussions.

Although Morgan Stanley sold some shares back to Palantir last year when Karp and others expressed similar frustrations, this time the bank wouldn’t budge, the people said, asking not to be identified because the talks were private. Morgan Stanley’s next quarterly price update is due on Thursday.

As Morgan Stanley’s investment bankers try to position themselves to lead an IPO for one of the world’s biggest private companies, the clash raises questions about how closely held companies are valued and the ways that Wall Street firms navigate many-layered relationships with potential clients.

Spokeswomen for Palantir and Morgan Stanley declined to comment.

The drama has only escalated as Palantir continues preparations for what’s widely expected to be one of the largest IPOs of recent years.

So far, the writedowns have had only a limited impact, with the entire stake held by Morgan Stanley’s mutual funds amounting to about $3 million as of mid-year. The funds have cut the per-share value of Palantir four times since June 2016. While other investors have also cut the valuation of their stakes, Morgan Stanley has consistently been on the low end.

The moves have taken a toll on employee morale at Palantir, according to current and former staff at the company. One reason: The prices can influence transactions on platforms such as EquityZen, a marketplace for employees to sell pre-IPO shares.

Like International Business Machines Corp., Tableau Software Inc. and other analytics providers, Palantir aggregates disparate data from far-flung sources and mines it for meaning. The 14-year-old company won early accolades for its work helping spy agencies -- its software has been credited with helping to locate Osama bin Laden -- but parlaying that success into the corporate world has been harder. The company has yet to turn an annual profit, people with knowledge of its finances have said.

Some observers point to brighter days ahead. Palantir’s new Foundry software automates data integration and other functions that were once handled by engineers -- a change that SharesPost Research analysts and others say will decrease costs to customers and increase margins for the company.

Morgan Stanley’s investment banking group is bullish, forecasting large customer contracts like those struck with Merck KGaA, Airbus SE and others will accelerate and position Palantir to fetch a valuation as high as $41 billion in a potential 2020 IPO, people with knowledge of the matter have said.

It isn’t clear why the bank’s mutual funds, run by famed portfolio manager Dennis Lynch, have adopted a conservative view of Palantir’s value. Morgan Stanley’s investment banking and fund operations are separated by a so-called Chinese Wall, ensuring that executives on one side can’t seek to benefit their business by influencing the other. They’re also privy to different information.

Jay Ritter, a professor at University of Florida’s Warrington College of Business who specializes in valuation, said the two Morgan Stanley groups have different motivations driving their calculations.

“For the investment bank, they have an incentive to talk about a high valuation for Palantir or any issuing company because the bankers are trying to win the deal,” he said. Mutual funds, on the other hand, have a fiduciary duty to be “as accurate as possible.” The bankers are also projecting into the future, while the fund has to value based on current conditions.

The valuation process for mutual funds like Lynch’s is typically independent from the portfolio manager. When valuations are difficult or fraught, mutual fund businesses can also enlist third parties to provide insights.

The debate has implications for what’s to come of one of Thiel’s biggest bets. The Silicon Valley billionaire and staunch supporter of President Donald Trump co-founded the company, serves as its chairman and remains a major investor. He was also a co-founder of PayPal Holdings Inc. and and early investor in Facebook Inc.

Ultimately, Morgan Stanley’s mutual funds might be proven right, Ritter said. “If we go back to the internet bubble, those with conservative valuations were a lot closer to the truth. Most people ended up losing lots of money.”

--With assistance from William Spada.

To contact the reporters on this story: Lizette Chapman in San Francisco at lchapman19@bloomberg.net;Sonali Basak in New York at sbasak7@bloomberg.net