Palladium will do better than platinum in the short term: Strategist

Spot palladium surged to a record high on bets that rebounding economies will fuel automaker demand, deepening supply shortfalls of the precious metal.

Palladium, used in catalytic converters to curb emissions in gasoline-powered vehicles, rose as much as 4.8 per cent to US$2,895.96 an ounce on Wednesday, surpassing the previous record set in February 2020. Prices have climbed more than 17 per cent this year, building on five straight annual gains.

The palladium market has been in a production deficit for several years, and tighter pollution standards in Europe and China are spurring demand for the metal from automakers. Disruptions at Russian mines run by MMC Norilsk Nickel PJSC, the world’s largest producer, have added to supply concerns. 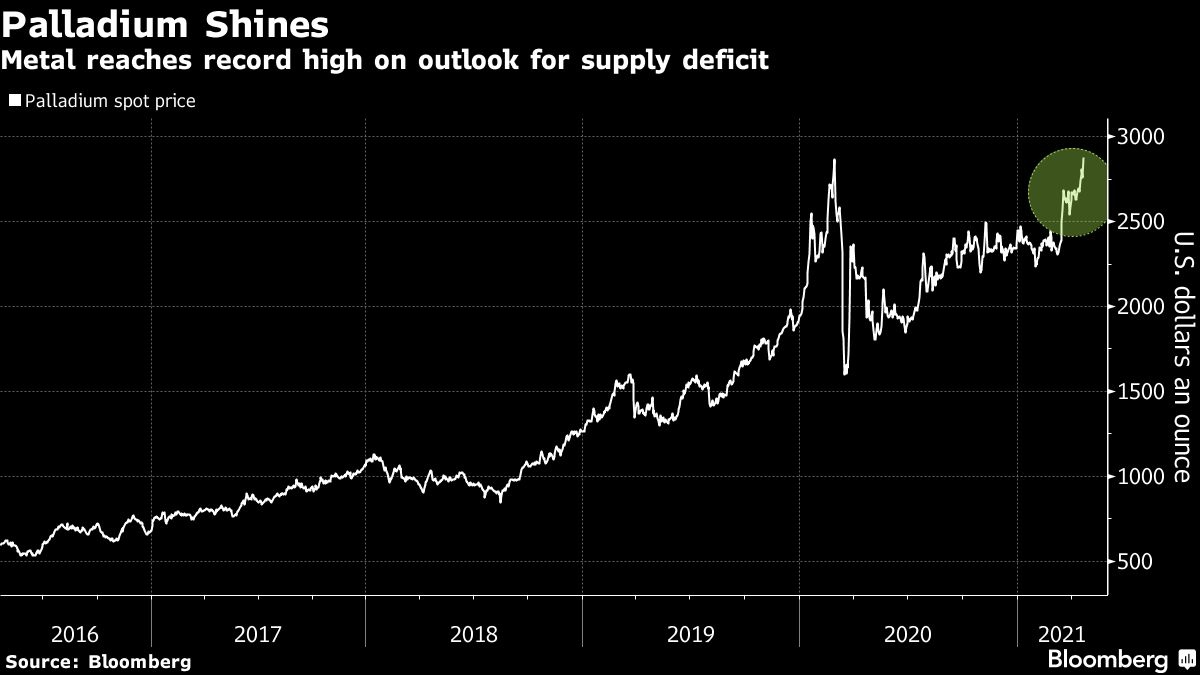 “There is nothing but tailwinds behind palladium at the moment,” said Jay Tatum, portfolio manager at Valent Asset Management. “With a global economic recovery on the way and the anticipated increase auto production speaking in favor of palladium, what are the chances that it is lower in three to four months?”

Analysts expect automakers that slowed production amid a global semiconductor shortage to restock supplies in the second half of this year and next year, adding to the bullish view.

The “‘catch up’ when chip supply recovers and auto stocks are rebuilt will be significant,” Citigroup Inc. analysts including Oliver Nugent said in a note. “This will be bullish for palladium physical balances especially.” It is likely that speculative buying prices this recovery ahead of time, they said.

Nornickel increased production of platinum and palladium in the first quarter even as two of its biggest Arctic mines fought flooding that forced the Russian mining company to lower annual targets.