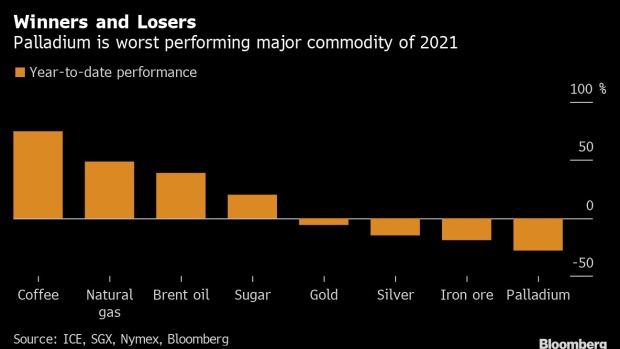 A red hot palladium ingot in the foundry at the Prioksky non-ferrous metals plant in Kasimov, Russia, on Thursday, Dec. 9, 2021. Bullion is heading for its first annual drop in three years as central banks start to dial back on pandemic-era stimulus. Photographer: Andrey Rudakov/Bloomberg , Bloomberg

(Bloomberg) -- Palladium’s had an eventful year: it surged to a record in May before plunging to the point where it’s poised to be the worst-performing major commodity of 2021. The prospects for next year look a bit brighter.

The silvery-white metal, around 85% of which is used in pollution-reducing catalytic converters in gasoline engines, had been rising since mid-2018 on auto demand and supply constraints. The rally went into reverse this year as the global chip shortage crimped consumption and technological advances also made it easier to use much-cheaper platinum in the converters.

That’s seen palladium plummet 26% in 2021, in stark contrast to robust gains across most of the commodities complex. Only iron ore, hit by China’s property market crisis, and silver have come close in terms of losses.

There are better days coming soon for palladium as Chinese purchases pick up and supply chain problems eventually ease, according to Nikos Kavalis, managing director at Metals Focus.

“We therefore expect a big rebound in demand, which should also be augmented by stock replenishment in China after a year of extremely low imports,” he said. “The market will move back into deficit in the second half of next year, driving prices up.”

A rebound in auto production should create upside in palladium in 2022, Morgan Stanley said in a note this month. The bank sees the metal averaging $2,100 an ounce next year, compared with a current spot market price of about $1,800.

Not everyone is so positive, however. Hedge funds’ net-short positions are the most bearish ever in data from the Commodity Futures Trading Commission that goes to 2009. Omicron is also threatening the auto market recovery and raising questions around mobility and economic growth, said Suki Cooper, an analyst at Standard Chartered Bank.

“Tactical positioning has been short palladium since mid-September and further auto demand downgrades have likely added to the near-term bearish sentiment,” she said. Beyond that though, pent-up demand will likely materialize as supply chains recover, which should drive upward momentum in the second half, Cooper said.

Palladium is also facing some major structural headwinds. The first is platinum substitution, which is expected to accelerate. Further out, the rise of electric vehicles will gradually erode its main source of demand. That’s reflected in Morgan Stanley’s forecasts, which see palladium at $1,850 an ounce in 2023 and then dropping to $1,210 over the longer term.

The market may have already taken into account many of those factors, said James Steel, chief precious metals analyst at HSBC Securities (USA) Inc.

The price recovery “will probably be more weighted toward the second half of the year as the problems that were generated by the chip shortage will likely be resolved by the end of next year,” he said. “Fundamentally, the market belongs more above $2,000 than below it.”