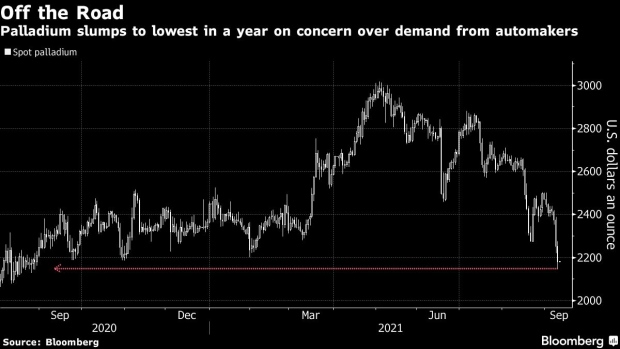 (Bloomberg) -- Spot palladium dropped to the lowest in more than a year, extending a slump in the metal amid concern over demand from automakers and prospects for substitution after a price-run-up earlier this year.

Palladium, which reached a record high earlier in May, fell for a fourth straight day to the lowest since August 2020. Platinum also slipped.

The World Platinum Investment Council said this week that it expects higher costs of palladium, used in vehicle pollution-control devices, to spur a gradual switch by automakers to using more platinum in gasoline-powered cars and trucks. Both metals have been hurt by expectations that auto output will remain constrained by a shortage of semiconductors.

“Both complexes (especially palladium) have gotten hammered this week as we have to suspect that difficulties in the global auto sector must be weighing on PGM demand,” ED&F Man Capital Markets analyst Ed Meir said in a note, referring to platinum group metals.

Bullion edged higher as the dollar weakened after the European Central Bank’s decision to reduce the pace of bond buying and signs of further recovery in the U.S. labor market.