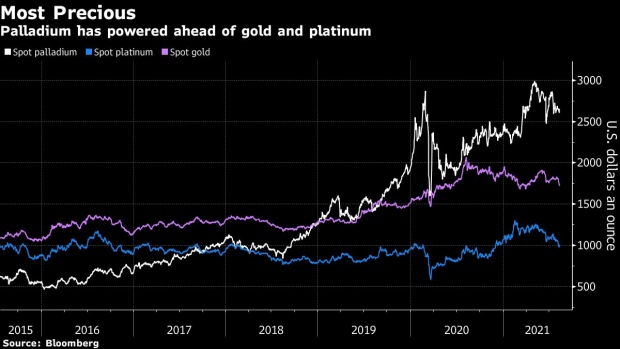 (Bloomberg) -- A rally in palladium that’s seen it more than triple in value since mid-2018 looks to be nearing its end as demand headwinds build.

Around 85% of global supply of the silvery-white metal is used in pollution-reducing catalytic converters in gasoline engines. The surge in prices coupled with advances in technology, however, are making it more attractive for automakers to use the much cheaper platinum. Further out, palladium faces an existential threat as electric vehicles gradually replace those using gasoline, meaning the current rally could well be its last.

Palladium has trounced its fellow major precious metals platinum and gold over the last few years. It benefited from stricter emissions standards in China and Europe as well as a shift away from diesel-powered vehicles, which use platinum in their catalytic converters, following the Volkswagen AG emissions-cheating scandal in 2015. Mine output -- mainly from Russia and South Africa -- has struggled to keep up, resulting in a deep supply deficit.

Greater platinum use in gasoline engines is being driven by the Tri-Metal Catalyst technology developed by German company BASF SE, which makes autocatalysts. The technology allows partial substitution of palladium with platinum and is being introduced in smaller vehicles from 2022 and 2023.

“We see the beginnings of platinum being substituted back into gasoline catalytic converters,” said David Jollie, head of sales and market insight at global miner Anglo American Plc. “This will bring palladium back from its fundamental supply deficit and closer to balance.”

But while the threats are looming, most analysts still see palladium’s rally as having some room to run before it enters a long-term decline:

The post-pandemic recovery in automobile production and tighter emissions standards will support consumption in the near term, Cooper said. Mine output will then pick up on the back of planned developments and, together with slowing demand, that will see palladium move closer to balance, if not into surplus, within the next five years, she said. Citi, while bullish in the short term, sees the market getting close to demand-supply equilibrium in 2023.

“Prices may surge to fresh highs above $3,100 but look increasingly frothy at those levels,” said James Steel, chief precious metals analyst at HSBC. “We expect historically higher prices will elicit greater volumes of heretofore unquantifiable stocks onto the market. This may calm prices later this year.”

The final act for palladium will likely begin toward the end of this decade as the transport fleet starts to significantly move away from fossil fuels. Electric vehicles will account for a third of global auto sales in 2030, up from 4.3% in 2020, according to BloombergNEF.

Palladium demand will increase in the short term due to more stringent emissions regulations and higher passenger vehicle sales, said Kwasi Ampofo, an analyst at BNEF. “By 2025, however, 16% of new passenger vehicles sold will be electric. This could lead to a subsequent decline in demand.”