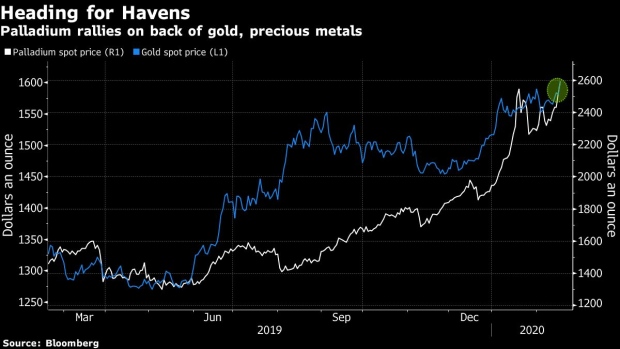 (Bloomberg) -- The coronavirus that has taken a toll on Apple Inc. is fueling demand for haven assets including precious metals, sending palladium to a fresh record.

Stocks fell after the Iphone maker said sales would miss forecasts because of work slowdowns and lower smartphone demand as China combats the coronavirus. That sent investors to the safety of precious metals including gold and palladium.

The rally in metals gathered pace around 10 a.m. as gold advanced above $1,600 an ounce. Over that full hour, volume for palladium was more than six times the average in the past 100 days for that time of day, according to data compiled by Bloomberg. Palladium delivered a 77% return over the past year, the biggest among 45 raw materials on the DCI BNP Paribas Enhanced Index.

“Palladium has been unbelievable – it’s like the Tesla stock of commodities,” Edward Meir, an analyst at ED&F Man Capital Markets, said by phone. “Prices are caught up in the rally in precious metals. Whenever these metals rally palladium tends to move as well, but by a greater magnitude.”

Gold futures rose 1.3% to $1,607.50 an ounce on the Comex in New York. The tally of outstanding contracts for the metal more than 30 times the size of palladium.