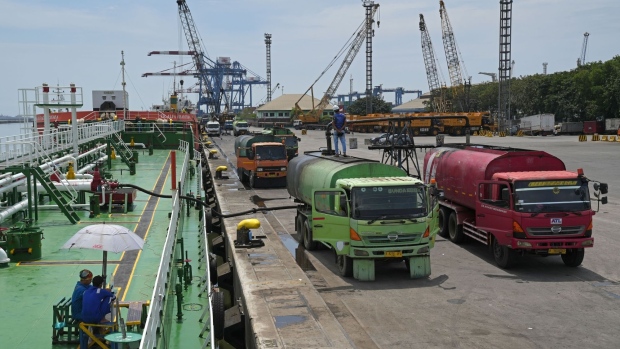 Palm oil loaded into trucks from a tanker docked at Tanjung Priok Port in Jakarta, Indonesia, on Tuesday, April. 26, 2022. After a shock announcement by Indonesia late Friday about banning all exports of cooking oil, the world’s top producer clarified days later that it will only halt exports of RBD palm olein, while shipments of crude palm oil can continue. , Bloomberg

(Bloomberg) -- Palm oil shipments from Indonesia, the world’s biggest supplier, may surge more than 60% in second half of the year from the first six months as the government ramps up exports to reduce bloated inventories.

The country is likely to ship 17.3 million tons overseas from July to December, according to Sahat Sinaga, acting chairman of the Indonesia Palm Oil Board, which represents the industry. That compares with just 10.7 million tons in the first half, which was way below expectations because of an export ban imposed in late April and other curbs, he said in a phone interview on Tuesday.

The boom in supply will keep prices of the world’s most consumed cooking oil under pressure and probably bring a further slowing in global food inflation from a record earlier this year. Veteran analyst Dorab Mistry said Tuesday palm oil prices could drop over 20% by September on the increase in cargoes.

Stockpiles have ballooned in Indonesia because of the export curbs, which were brought in to cool domestic prices. Mistry estimates the inventories are now around 10 million tons and will continue to climb in August because of high local output. Sinaga said stockpiles exceeded 7 million tons in early July.

The main issue that has to be resolved right now is the high inventory level, Sinaga said. The bloated reserves mean that mills are not buying fresh fruit bunches from farmers, leaving them to rot in the plantations. That could reduce production this year to 50.2 million tons from an initial estimate of 53.8 million tons and compared with 51.3 million tons last year, he said.

Exports need to speed up to free storage capacity for the incoming production, which Sinaga says will reach a peak of 4.6 million tons in November.

The government can boost exports by extending the levy waiver to October and by cutting the export tax by 25%, Sinaga said. A zero export levy throughout August will not be enough to accelerate shipments, he said.

Indonesia removed the halt in exports in May, three weeks after it was imposed, and replaced it with a policy that requires producers to sell some output locally, the so-called domestic market obligation, and also gives companies the option of paying a special tax to get additional export quotas.

“Forget the DMO policy for the time being,” Sinaga said. “It’s complicating export procedures.” Converting actual DMO volumes into export quotas takes time, and after that, exporters must get shipment permits and seek buyers and vessels before they can send supply to the global market, he said, noting that high local prices, the main reason for the curbs, have been declining anyway.

Other comments from Sinaga: