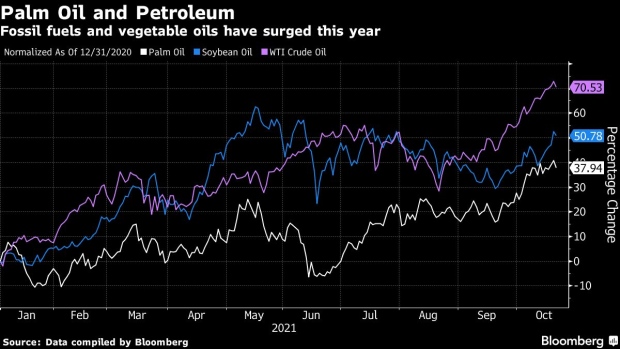 (Bloomberg) -- Palm oil futures in Malaysia reversed earlier gains to a record to close lower for the first time in four days, depressed by prospects of increased production this month in second-biggest grower Malaysia.

Expectations are now for output to be 3% to 4% higher in October from a month earlier, said Marcello Cultrera, an institutional sales manager and broker at Phillip Futures in Kuala Lumpur. Meanwhile, demand is running 10%-14% lower than in September, and the biggest importers such as India and China are fully covered for November and partially for December, he said.

Malaysian palm oil exports fell 14% in the first 20 days of October from a month earlier, according to cargo surveyor SGS Malaysia on Thursday, with shipments to India and China tumbling 18% and 28% respectively.

A retreat in petroleum prices from seven-year highs and a decline in soybean oil also weighed on futures. In a day of wild swings, the most active January contract jumped as much as 2.9% to 5,220 ringgit a ton, before closing 2.1% lower at 4,966 ringgit. The market is still heavily backwardated.