The shipping crisis is making it hard to get cotton out the door: Economist

The global shipping bottlenecks rattling industries and consumers in the pandemic era were plain to see for the politicians, economists and investors gathering for a Latin American economic forum in Panama on Wednesday.

There were 101 vessels waiting their turn to make the 40-mile journey across the Panama Canal Wednesday, six more than the average so far this year, according to data compiled by Bloomberg.

The canal saw record amounts of cargo pass through its locks in its most recent fiscal year as an easing of trade restrictions between China and the US opened up the market for grains, pork and liquefied natural gas.

The US$5.25 billion expansion of the passage that opened in 2016 allows larger ships from Asia to more easily reach the East Coast, enabling carriers to bypass lingering logjams at the US’s largest gateways in California.

Asian imports into the US West Coast decreased 3.4 per cent in the first quarter from a year earlier, while the number of goods entering the East Coast climbed 12.9 per cent, according to freight market-analytics platform Xeneta. Those entering the Gulf Coast rose 31.1 per cent, it said.

Still, the ripple effects of Chinese lockdowns are starting to be felt. After vessels moving through the canal rose 18 per cent in April from the same month last year, this months it is experiencing a delayed effect from Beijing’s zero-COVID policy, Panama Canal Authority Administrator Ricaurte Vasquez said in an interview from the event.

Ports from Asia to the US are being impacted by lockdowns that have restricted manufacturing at at time the industry is paying close attention to whether inflation impairs purchasing power heading into the high season for consumption, he added.

The real jam, however, is in the natural-gas corner of the market. The projected wait time for LNG tankers wanting to cross from the Pacific Ocean to the Caribbean Sea is 15 days, according to Panama Canal Authority data -- double the average so far this year. 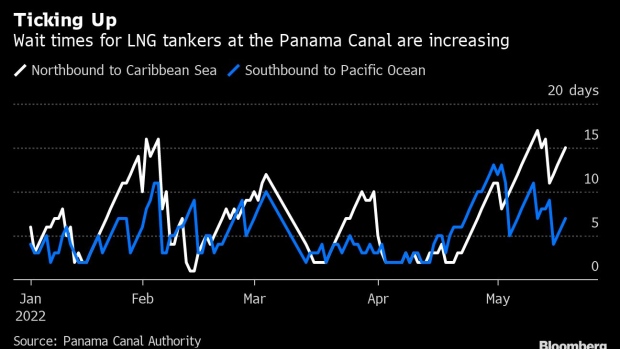 Once manufacturing learns how to live with COVID, the situation should stabilize, Vasquez said. As long as the resumption is gradual, then shipping will be able to adapt, with the market still “very strong in terms of vessel availability.”

“Maybe the pace is different and maybe origin and destination is going to shift somewhat, but once the lockdown is normalized, one can anticipate that orders will flow and then products will go out,” he said.