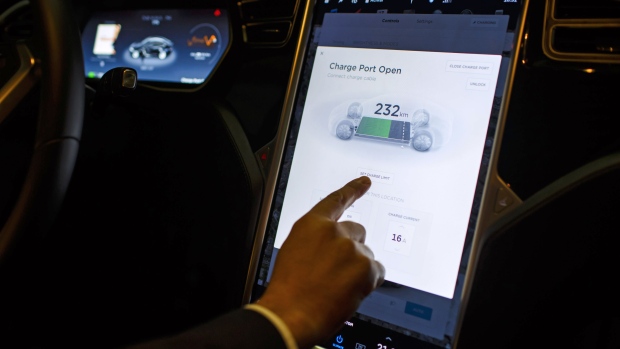 Anticipation had been building for the Japanese company to unveil plans to construct a new battery factory in the US, but instead the CFO spoke at a post-results briefing about ongoing robust demand for batteries, including the 2170 cells it supplies for Tesla’s electric vehicles.

Panasonic has been scouting sites in Oklahoma and Kansas for its multibillion-dollar factory, Bloomberg News reported in March. The newly planned plant is part of its push to increase investment in EV cell production — a segment the 104-year-old Japanese electronics giant sees as critical for future growth.

“We can’t say more than what has been released, but we are getting many requests,” Umeda said on Wednesday. “We seeing continued strong demand from Tesla, for 2170 batteries, but also for faster development of the 4680.”

At its planned US factory, Panasonic is aiming to manufacture 4680 batteries, which are bigger and more powerful, people familiar with the matter have said. The Japanese company its betting that the newly-developed technology — championed by Tesla CEO Elon Musk as the key to unlocking $25,000 EVs — will open up doors to supply other automakers in addition to Tesla.

Both Oklahoma and Kansas have for some months been working on financial incentive packages to lure the Japanese company and the jobs the factory would bring. For Panasonic, settling on either location comes with the benefit of being close to the new factory that Tesla recently opened in Texas.

Yuki Kusumi, Panasonic’s chief executive officer, said in April that the manufacturer will invest 600 billion yen ($4.6 billion) in automotive batteries, supply chain software and other areas the company sees as core to its growth.

Panasonic also views opportunities in supply-chain software. Last year, it spent $7.1 billion buying Blue Yonder, one of its biggest-ever acquisitions. The company said earlier on Wednesday that it is considering an initial public offering of the business.