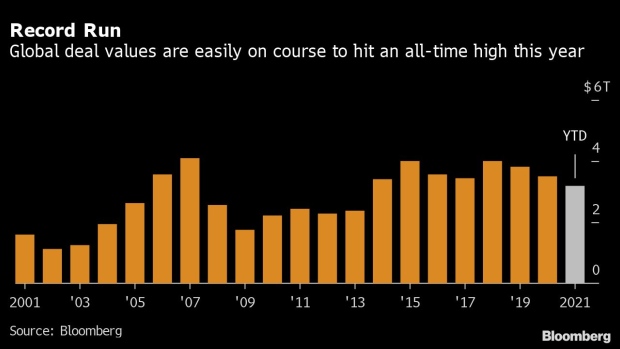 (Bloomberg) -- A surge in merger activity propelled profits at the U.K.’s largest law firms despite a collapse in the global economy triggered by the coronavirus pandemic.

A year that started with virus-related uncertainty gave way to record deal activity that helped four elite London firms, known as the Magic Circle, report bumper financial results. Transactional lawyers around the world advised on over $4 trillion worth of deals in the year ending April 31, according to data compiled by Bloomberg.

Freshfields Bruckhaus Deringer led the way posting a 5% revenue boost to 1.6 billion pounds ($2.2 billion) for the financial year -- much of the growth was attributed to their work on eye-catching deals. Those included AstraZeneca Plc’s $39 billion acquisition of Alexion Pharmaceuticals Inc. and the sale of Cazoo for $7 billion, one of the largest ever SPAC deals.

Canary Wharf-headquartered Clifford Chance reported an 8% increase in partnership profit and a 1% rise in revenue, its sixth straight year of growth. The firm helped guide Pfizer Inc. on its vaccine partnership with BioNTech and it also advised PIF on the $69.1 billion sale of its shareholding in SABIC to Saudi Aramco, the largest ever deal in the Middle East.

While travel restrictions disrupted certain global infrastructure projects as well as court and arbitration disputes, it was offset by “significant peaks in activity levels” in their M&A, restructuring, insolvency and antitrust teams, he said. The firm expects that momentum to continue this year.

Still behind their Wall Street counterparts, Freshfields held a global market share advising on over 7% of all deals, just ahead of Clifford Chance on 6%. Linklaters and Allen & Overy both around 4%. Sullivan & Cromwell had the biggest global share of more than 10%, according to data compiled by Bloomberg.

The surge in deals isn’t slowing. So far this year, around $3 trillion of global deals have been reported and it’s the busiest ever summer for merger activity.

The firm’s global managing partner Gareth Price pointed to “exceptionally high levels of deal activity.” Allen & Overy has taken a position in growing markets such as U.S. and European SPACs, both from a merger and capital markets perspective and its restructuring and leveraged finance practices also saw stood out, the firm said.

“Despite a softer start to the year as a result of the impacts of Covid-19, the global corporate practice worked on an unprecedented level of transactions in the second half,” he said.

The fifth member of the Magic Circle, Slaughter and May, does not disclose its financial results.