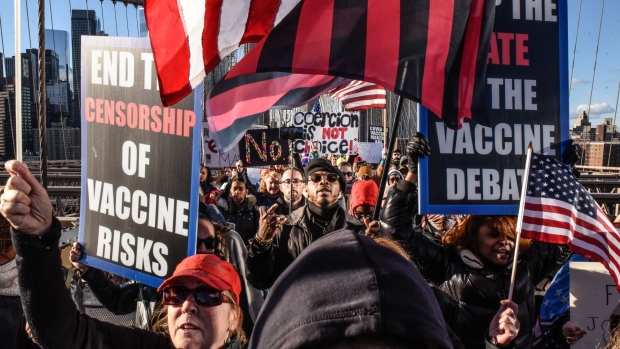 Demonstrators hold signs during a Worldwide Walkout protest to stop Covid-19 mandates in New York, U.S., on Wednesday, Nov. 3, 2021. New York City Mayor Bill de Blasio said the vast majority of municipal employees are complying with the Covid-19 vaccine mandate and that about 9,000 employees have been placed on unpaid leave for not receiving the shot. , Bloomberg

(Bloomberg) -- The Covid-19 pandemic created deeper social divisions compared to the beginning of the outbreak, exposing weaknesses in political systems, according to findings of a survey conducted in 19 upper- and middle-income countries.

Overall, 61% of respondents said their countries became more divided during the pandemic, according to the recent Pew Research Center survey. The perception of increased social friction was highest in the US, where 81% of those surveyed held that view, and two-thirds said the country’s pandemic response revealed political frailty.

Americans “stand out among all 19 countries surveyed for being the most likely to perceive division in the country and the most likely to say that the country’s response to the pandemic has highlighted the failings of the political system,” the report said. “Only in the US does a majority of even the governing party supporters -- Democrats, in this case -- say the virus has laid bare the country’s political failings.”

After more than 2 1/2 years since Covid appeared, accurate tests and effective vaccines have shown their ability to tame the virus and enable a return to a normal society that had been disrupted by lockdowns, overrun hospitals and deaths. Still, the necessity of masks, the safety of vaccines and treatments, and even the source of the contagion continue to be argued in the halls of government as well as in online forums.

Most respondents in the Netherlands, Greece, Germany, Japan, Australia and South Korea also said that flaws in their countries’ political systems were revealed by the pandemic. Only respondents in Singapore, Hungary, Israel and Sweden felt that their country’s handling of the coronavirus showed their nations’ strengths.

In most countries, partisan politics likely played a key role in respondents’ view of their countries’ response to the pandemic. People who supported the governing political party were more likely to praise how their country is dealing with the virus.

The survey of 20,944 adults was conducted from Feb. 14 to June 3. Other countries involved included Canada, Belgium, France, Italy, Spain, the UK and Malaysia.