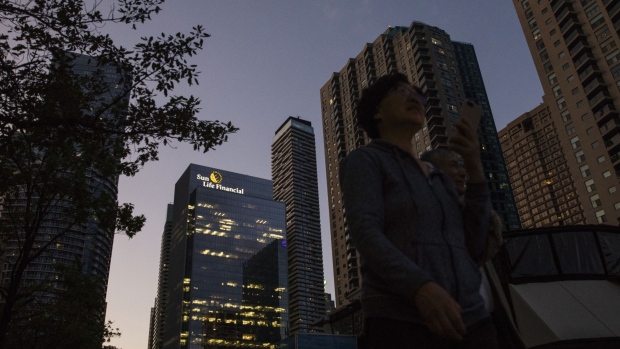 Pedestrians walk past the Sun Life Financial Inc. headquarters, left, in Toronto, Ontario, Canada, on Sunday, Aug. 11, 2019. Sun Life reached its lowest ever coupon for any of its bonds with the issuance of its first sustainable notes in a fresh sign that demand for such debt is increasingly driven by general investors scratching for some yield above inflation. , Brent Lewin/Bloomberg

TORONTO - Sun Life Financial Inc. says the COVID-19 pandemic is to blame for troubles in its latest quarter.

Executives at the Toronto-based insurer said Friday that the health crisis had pushed down insurance sales in Canada by 22 per cent and lowered interest rates.

“The economic impact of COVID-19 increased credit charges and we had a higher effective tax rate on underlying earnings,” said Dean Connor, Sun Life's chief executive, on a call with analysts.

His remarks came after Sun Life revealed Thursday that its net income fell to $519 million or 88 cents for the period ended June 30, compared with $595 million or $1.00 per share in the same quarter the previous year.

Sun Life's net income was below the $657.57 million or $1.06 per share analysts expected, according to financial markets data firm Refinitiv.

By that measure, Sun Life beat analyst expectations, which were $63 million or $1.13 per share, according to Refinitiv.

However, insurance sales in the quarter were down $619 million or six per cent across all markets.

“But it's better than the minus 20 per cent we mentioned on the first quarter call that we saw in April,” said Connor.

U.S. and Asia insurance sales were in line with the prior year, though some international markets like China and Vietnam saw sales edge up.

He was pleased with the popularity of Sun Life's virtual offerings and said its digital health and wealth program Ella was used more than 13.5 million times during the pandemic.

“COVID-19 has created much economic uncertainty, but we remain confident in our business mix, our financial strengths and our ability to execute well during these complex times,” Connor said.