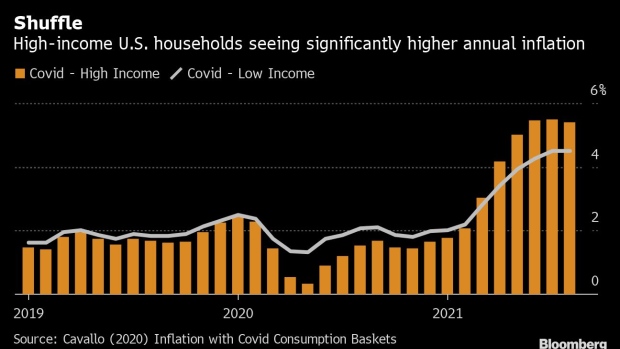 (Bloomberg) -- Inflation rates are now higher for top-earning U.S. households than those on low incomes, reversing the trend that took hold earlier in the pandemic, according to research by Harvard economist Alberto Cavallo.

Covid-19 has caused headaches for price statisticians because it’s changed the way people spend. Headline measures of U.S. inflation use a basket of goods and services that’s based on pre-pandemic shopping habits -- so it doesn’t always capture the higher prices that Americans have been paying in the past 18 months or so.

Cavallo, an inflation specialist, has come up with baskets weighted according to what consumers actually spent money on since the pandemic began. He found that the inflation rates experienced by different income groups, which were broadly similar in 2019, have diverged since then. In the pandemic’s first year, prices were rising faster for low-earners. In the last few months the opposite is true.

That reflects the way spending has shifted. At the start of the pandemic, items like food -- where price increases tend to impact low-income households the most -- made up a bigger part of consumer outlays.

As the economy reopened this year, there was a spike in the prices of things like cars and air travel -- and a resumption of restaurant dining. Those items account for a larger share of household budgets among higher earners.

For similar reasons, headline rates of inflation -- which last year were under-stating the effective price increases that Americans were paying, according to Cavallo’s research -- are now over-stating it. For the past few months, prices in the Covid basket have been rising more slowly than the CPI.

The study found a similar pattern in other countries, though the gap between official inflation and Covid-basket inflation is bigger in the U.S. than elsewhere.

Cavallo’s research uses credit- and debit-card transactions to adjust the official weightings on the Consumer Price Index. His low- and high-income baskets are based on spending by the top and bottom 20% of earners.