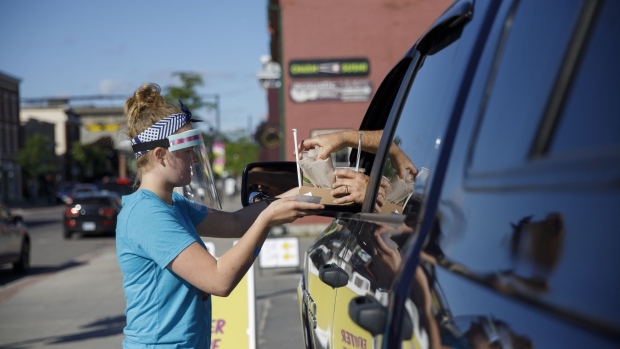 A server brings an order to a parked car outside a diner in Picton, Ontario, Canada, on Saturday, June 13, 2020. Ontario businesses ranging from hair salons, shopping malls, swimming pools, beaches and campgrounds were allowed to reopen Friday and restaurants and bars opened their outdoor dining areas and patios for the first time since the pandemic began. Photographer: Cole Burston/Bloomberg , Bloomberg

​OTTAWA - The Bank of Canada says consumers' concerns about finding work during the pandemic could signal longer-term problems for the country's labour market.

The central bank's quarterly survey on consumer expectations showed that respondents believed they were less likely to find a new job if they lost their current one.

Respondents also told the bank that they were less likely to leave their job voluntarily.

The bank says the results suggest fewer workers will be changing jobs or “moving up” and that could weigh on future wage growth.

The survey of consumer expectations was conducted during November just as COVID-19 case counts started to rise nationally, but before lockdowns in some provinces.

However, the bank says most businesses don't expect the positive impacts of vaccinations to materialize until later this year.