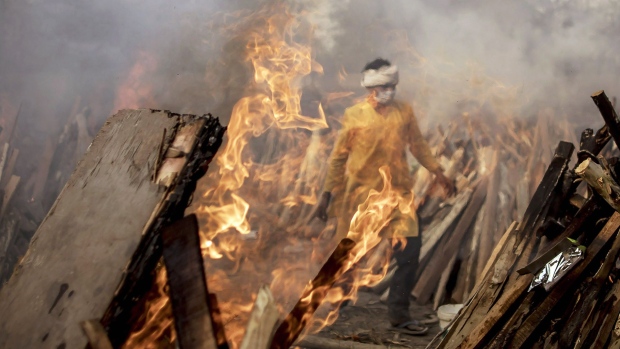 NEW DELHI, INDIA - MAY 01: A priest who works at a crematorium is seen amid burning funeral pyres of patients who died of COVID-19 on May 01, 2021 in New Delhi, India. With cases crossing 400,000 a day and with more than 3500 deaths recorded in the last 24 hours, India's Covid-19 crisis is intensifying and shows no signs of easing pressure on the country. A new wave of the pandemic has totally overwhelmed the country's healthcare services and has caused crematoriums to operate day and night as the number of victims continues to spiral out of control. (Photo by Anindito Mukherjee/Getty Images) , Photographer: Anindito Mukherjee/Getty Images AsiaPac

It’s an oft-repeated warning that poor countries will suffer more from climate change than rich countries. Most developing economies are more dependent on weather-linked sectors, such as agriculture, while having fewer resources to adapt to a warming world.

There is one factor that can help mitigate some of those limitations: good governance. We’ve seen how much of a difference it can make in the fight against Covid-19. One of the starkest examples is the tragedy unfolding in India right now.

I grew up in Maharashtra, which is one of the Indian states worst affected, and most of my family is still there. That’s made the last few weeks very hard. Every other day, there’s some grim news of a family friend or a relative falling victim to Covid-19 and no one can be sure how much devastation the current wave of infections will leave behind.

But a few things are already clear. The Indian government did not act on advice that its own scientific team provided in early March, according to a Reuters investigation. Instead the Bhartiya Janata Party, represented by Prime Minister Narendra Modi, organized political rallies in the state of West Bengal. It also allowed millions of Hindus to attend the weekslong Kumbh Mela religious festival. Even today, as countries from around the world have sent life-saving equipment and medicine, much of it appears to be sitting in the airport in New Delhi waiting to be distributed.

Crucially, the government did not learn the lessons of a less deadly wave of infections last year. It failed to ramp up health infrastructure, including the supply of medical oxygen, according to a Scroll.in investigation. The result is that many people who could have recovered from the infection are unable to do so.

While limited resources and poor infrastructure are crippling India’s response at the peak of infections, better governance could have helped the country avoid the dire situation in the first place. “An individual can only go so far to protect themselves from something like Covid. People actually need to be supported by an enabling state,” says Rebecca Willis, a professor at the Lancaster Environment Centre. “The same is true for climate.”

The question of how much government intervention is needed frequently arises when it comes to tackling climate change. In some ways, the anti-lockdown and anti-masks protests are a variation on the same divide. “The big government/small government argument has been weaponized in politics, but it’s not very meaningful,” says Willis. Instead what you need is effective government or, as University College London economist Mariana Mazzucato puts it, mission-oriented government.

Thailand, Rwanda, Sri Lanka, Togo, and Malaysia are low- or middle-income countries that rank among the top 20 in Lowy Institute’s Covid Performance Index. Vietnam, China, Thailand and Malaysia feature among the top 20 countries in Bloomberg’s Covid Resilience Ranking. Countries like Thailand and Malaysia, which are ranked close to India on The Economist’s Democracy Index, have managed the pandemic better. On the flipside, rich countries such as the U.S. and the U.K. recorded some of the worst death rates under poor leadership.

Covid-19 and climate change are different beasts. With the pandemic, governments have had to step in to impose immediate restrictions and provide financial help. It’s a big intervention on a short timescale. When it comes to global warming, governments will need to ensure that laws and incentives are in place that will enable people and companies to cut emissions over decades. That’s a smaller intervention over a longer timescale.

In both cases, however, money alone isn’t enough. What matters more is how systems are put in place, preparation against obvious risks are made, and how effective governments are at convincing their populace to respond.