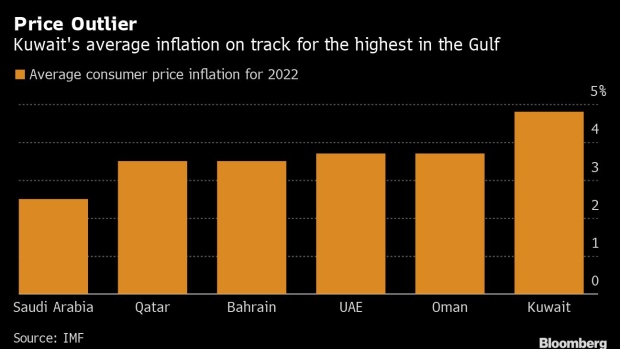 It was a stopgap measure by one of the world’s richest countries, meant to protect an economy that relies on imports for more than 90% of its food.

But as its side effects increasingly come at a cost to companies and consumers, Kuwait’s experience carries a lesson for a growing number of nations around the world that are imposing or at least debating price controls to cope with record inflation.

“Controlling prices will lead to shortages,” said Eid Al-Shihri, an economist who’s a board member of the Kuwait Entrepreneurs Society. “When the government freezes prices, it shifts away from the market equilibrium, so those on the market supply side are affected.”

Even as global food prices surge to an all-time high and supply shocks spread following Russia’s invasion of Ukraine, Kuwait has continued to cling to limits on how much companies could charge for basic food items, driving away suppliers and raising the risk some staples will grow scarce.

Crafting a domestic fix to a global dilemma is fraught with risk even in the case of Kuwait, a major oil producer that’s among the beneficiaries of higher energy prices.

As a safeguard against inflation, it already runs a system of generous government subsidies as well as provides guaranteed jobs for citizens.

But the government decided it needed to do more to shock-proof the economy for survival during the pandemic, with the Ministry of Commerce and Industry issuing a decision in March 2020 to freeze all consumer food prices.

While providing a check on prices, Kuwait’s inflation is still higher than among its neighbors, with the International Monetary Fund estimating it will average 4.8% this year.

The caps have never been lifted despite intentions to do so, however, and they are now backfiring in ways Kuwait is struggling to contain. The losers from the situation are many.

Some manufacturers are re-routing certain products away from Kuwait, according to people familiar with the matter. At times producers are directing their goods away from Kuwait at the last minute, opting for other Gulf countries where they can make a profit and contend with less bureaucracy, the people said, asking to remain anonymous discussing a sensitive issue.

The supply of chicken has lately emerged as one of the more problematic issues. The government’s controls on poultry no longer make it feasible to sell at that price, one of the people said. A sugar shortage is also expected in the next weeks, according to a major Kuwaiti retailer.

Shortages are a threat should companies not be allowed to raise prices and if hurdles at the port -- including constraints on larger ships -- aren’t fixed, according to some of the people.

The measures are already depriving consumers of choice.

One major Kuwaiti retailer that asked not to be named said it’s witnessed a narrowing range for the main commodities, providing a list of suppliers that have decreased their options due to inflation and price restrictions.

“Merchants can’t import what the people need,” said Mohammed Al-Saqer, chairman of the Kuwait Chamber of Commerce and Industry. “We’ve been in touch with the government about this for the past 18 months. The decision is wrong because prices went up.”

Commerce Ministry and government officials couldn’t be reached for comment.

The dilemma for Kuwaiti authorities is that the idea of freeing prices remains unpopular even as the policy of controls looks more unsustainable by the day.

The two-year-old ministerial decision still doesn’t account for any of the new costs, ranging from added logistics expenses to the increased price of raw materials after the war in Ukraine.

The government resigned in April and the country is awaiting the formation of a new cabinet, a process that has virtually paralyzed decision-making. Unlike other Gulf states, Kuwaitis have an elected parliament whose fractiousness complicates policy.

It’s unlikely the price caps can be lifted until a new government is formed.

The warnings meanwhile are growing ever louder. In a letter carried by Al-Anba newspaper this week, the Kuwait Food Union, an industry group, said importers of foodstuffs will halt the shipment of many products needed by households.

“Importers won’t be able to face the global increase in prices of these products,” it said. “This threatens reducing strategic reserves.”