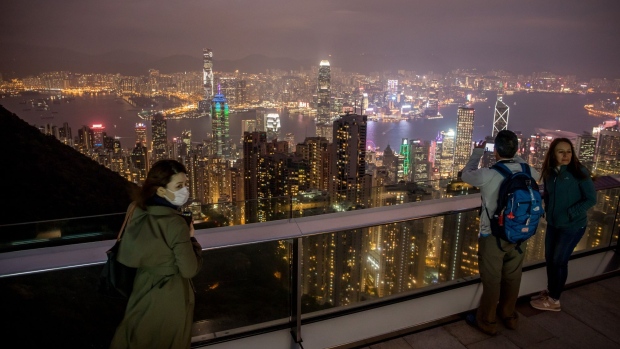 People look at the city's skyline from a viewing terrace at Victoria Peak in Hong Kong, China, on Monday, Feb. 3, 2020. The outlook for the Hong Kong economy in 2020 is “subject to high uncertainties” including the global economic recovery, U.S.-China trade relations, the ongoing protests and the progression of the viral outbreak, the government said in a release. Photographer: Paul Yeung/Bloomberg , Kiuyan Wong

(Bloomberg) -- Firms such as State Street Corp. and CF Global that offer outsourced trading services are seeing more inquiries in Asia as fund managers and family offices look to cut costs and set up contingency plans.

Asia, and China in particular, has lagged behind other regions on the outsourcing front because of a reluctance by particularly family offices to go outside for help, according to executives in the industry. That is now slowly changing in part as the pandemic revealed the need to have backups.

“Asia is catching up,” said James Woodward, APAC head of portfolio solutions who runs the outsourced trading desk at State Street, which has been offering the service in Asia since 2010. “There’s obviously an education phase, but as we move forward, some of those Asian funds embrace the benefits that can be garnered from some of these firms’ investments in all the technology and infrastructure and capability sets.”

While in-house trading has long been viewed as providing a potential competitive edge for big asset managers, the combination of intense competition, new regulations and a push to streamline costs are leading more and more funds to outsource execution to specialist firms. Asia’s quickly-expanding wealth management industry is a holy grail for the companies which provide such services, but the region has so far lagged behind the U.S. and Europe in moving to outsourced trading.

About 40 companies engage in the business worldwide, ranging from big firms such as Amundi and UBS Group AG, to smaller firms including Jones Trading and Outset Global LLP, according to a research report by Hong Kong-based consultancy Quinlan & Associates. Outsourcing is prevalent among big global asset managers. A recent survey by Northern Trust of 300 big firms showed that 85% were already taking on the service or interested in doing so, according to a 2021 report called “Outsourcing: From Niche to Norm.”

Asset managers can use a “pay-as-you-go” model when employing outside traders, who act as a go-between the buy and sell sides to execute orders, saving fixed costs on human resources, trading, technology and access to research, according to Quinlan.

Read More: The Buy-Side Trader Is Latest Job to Be Outsourced as Costs Rise

CF Global, established in Hong Kong some 20 years ago as one of the oldest independent outsourcing firms in the region, has been gaining clients primarily in Hong Kong and Singapore, the region’s two trading hubs for international investors. Part of the demand comes from hedge funds who are seeking dealing partners outside of the brokers as well from clients who use the firm to extend operations into European and U.S. hours, according to the firm’s co-founder, Robert Fleming.

While new asset managers in Asia often still hire a trader or two during startup phase, that’s now beginning to change, Fleming said. Its main clients in Asia are still international asset managers who invest in the region, but it also does trades for local “long-only” firms and hedge funds, he said.

A head trader can cost $500,000 to $786,000 a year depending on seniority and type of fund, according to Quinlan research. The direct costs of trading for a team of 40 traders overseeing $1.5 billion is at leasts $14 million. The research showed that 52% of the asset managers interviewed planned to cut costs.

Read More: The Buy-Side Trader Is Getting Outsourced in Coronavirus Crisis

While business in picking up across Asia, offering trading mainland China is proving the toughest market to crack even as the nation opens its financial market.

Setting up business on the mainland isn’t a priority, according to CF Global. “From the perspective of a Chinese fund, the likely interest would be to outsource non-China execution, so our global footprint and links to hundreds of brokers quickly become relevant,” Fleming said.

The firm can also get in on the China trade through trading links between the Hong Kong exchange and the bourses in Shenzhen and Shanghai, he said.