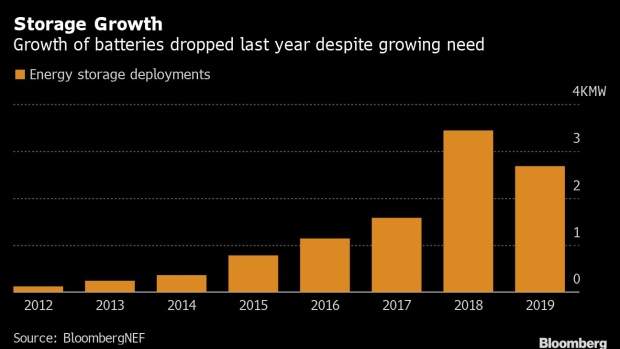 Photovoltaic panels stand in a floating solar farm in this aerial photograph taken on the outskirts of Ningbo, Zhejiang Province, China, on Wednesday, April 22, 2020. China's top leaders softened their tone on the importance of reaching specific growth targets this year during the latest Politburo meeting on April 17, saying the nation is facing "unprecedented" economic difficulty and signaling that more stimulus was in the works. Photographer: Qilai Shen/Bloomberg , Bloomberg

Coronavirus has exposed a lack of investment in the big batteries crucial to unlocking solar and wind power.

A drop in energy demand caused by the pandemic has left European grids overloaded with green electricity, raising the threat of blackouts and underlining the need for energy storage in a low-carbon energy system.

Europe is striving to rid its power grids of carbon emissions by the middle of the century. But what should be an incentive to increase the use of batteries isn’t happening nearly fast enough with installations dropping last year, according to BloombergNEF.

“Batteries are extremely critical,” Fatih Birol, executive director of the International Energy Agency, said in an interview. “They are ready for the big time” and should be included in post-virus economic recovery packages, he said.

One reason for the drop in battery installations comes down to how power markets are set up, according to Marco van Daele, chief executive officer of Susi Partners AG, a clean energy infrastructure fund. The newness of storage technology and the lack of long-term income streams has put investors off.

“An obstacle for much wider investment in the space is the lack of contracted and visible revenue,” he said. Even as the costs of building batteries come down, “the remuneration of that capacity needs to become more visible in order to attract the large-scale investment needed.”

For decades, power markets have been designed around demand and ensuring there is enough supply to fulfill peak consumption. Slowly the focus is changing to how to control an oversupply when it’s sunny or windy. And with renewables having priority feeding into the grid, they have more influence over how the system is managed.

Read more about how renewables are impacting the grid in Britain

The slide in demand caused by the virus lockdowns has been “like pressing a fast-forward button in power markets to where you have large amounts of generation but not the investment in flexibility,” said Peter Osbaldstone, research director on European power and renewables at Wood Mackenzie Group Ltd.

For its part, the EU has proposed a 750 billion-euro ($824 billion) recovery plan to accelerate the transition to clean transport, increase energy savings and boost the production of renewable power.

The European Battery Alliance wants to use the opportunity to accelerate projects that would create 1 million jobs in the sector that could be worth 210 billion euros within the next 2-1/2 years, according to European Commission Vice President Maros Sefcovic.

European carbon emissions are on track for a 17% reduction this year, thanks to a higher proportion of renewables used to meet demand.

For battery owners, swings in prices when renewables hit the grid could be a major opportunity. Batteries can charge up when solar and wind generation is plentiful and market rates are low, and then sell power to the grid when prices are higher. With enough capacity on the system, buying and selling from battery operators could ultimately help ease the price swings.

The U.K., Ireland, Italy, France and Germany have high potential for growth in the short-term, according to Marek Kubik, market director for U.K. and Ireland at Fluence Energy LLC.

Factors such as retiring thermal generation, fast-growing variable renewable generation and a move to electrify sectors like transport and heat all point to a need for flexibility that can be easily supplied by battery-based energy storage, he said.