Deal with British American Tobacco is 'game-changing for us': Organigram CEO

Market researcher Mintel found in a survey of 2,000 British adults last fall that more than half of cigarette users were stress smoking more than before the pandemic. Some 10 per cent started smoking again after giving up. Overall, 30 per cent of the smokers surveyed reported lighting up more regularly since the outbreak.

And the picture looks similar elsewhere: Many people in the U.S., as well as Canada, France, Israel and South Korea, have also said they are smoking more, according to Euromonitor International. After all, not only does working from home mean more smoke breaks, but add in the stress, isolation and boredom of lockdowns, and you have a recipe for good intentions going up in smoke. 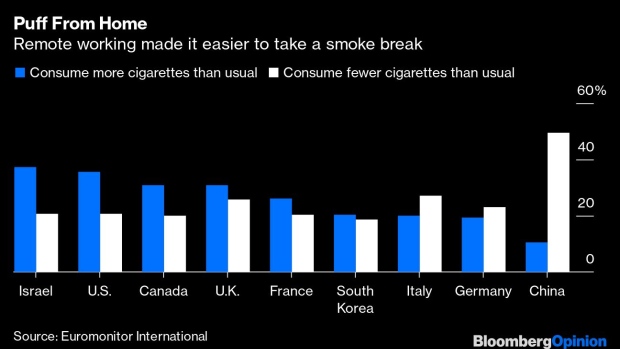 This week the Biden administration threatened to cut nicotine levels in cigarettes so that they’ll be less addictive. And cigarette use overall remains on a long-term decline, with analysts at Jefferies predicting that in many markets there could be no smokers in 10 to 20 years.

Indeed, global cigarette volumes likely fell about 3 per cent last year (excluding China and travel retail sales, which collapsed). That’s broadly in line with the downward trend of the last five years, though the mix was different: Developed markets, such as the U.S. and U.K., saw stronger sales, while those in some emerging markets fell.

So despite a WFH surge in smoking, the future of Big Tobacco still depends on its ability to develop less harmful alternatives. And there continues to be a great deal of debate over how much safer products like electronic cigarettes and devices that heat rather than burn tobacco actually are.

The most popular alternative is vaping.Mintel also found that 42 per cent of British electronic cigarette users were vaping more regularly last year. Although the pandemic has had little effect on the U.S. vape market, alarms raised two years ago over vaping-related illnesses and a teen vaping epidemic had an impact: There were 9 million vapers in the U.S., last year, down from 12 million in 2019, according to ECigIntelligence, which tracks the market. 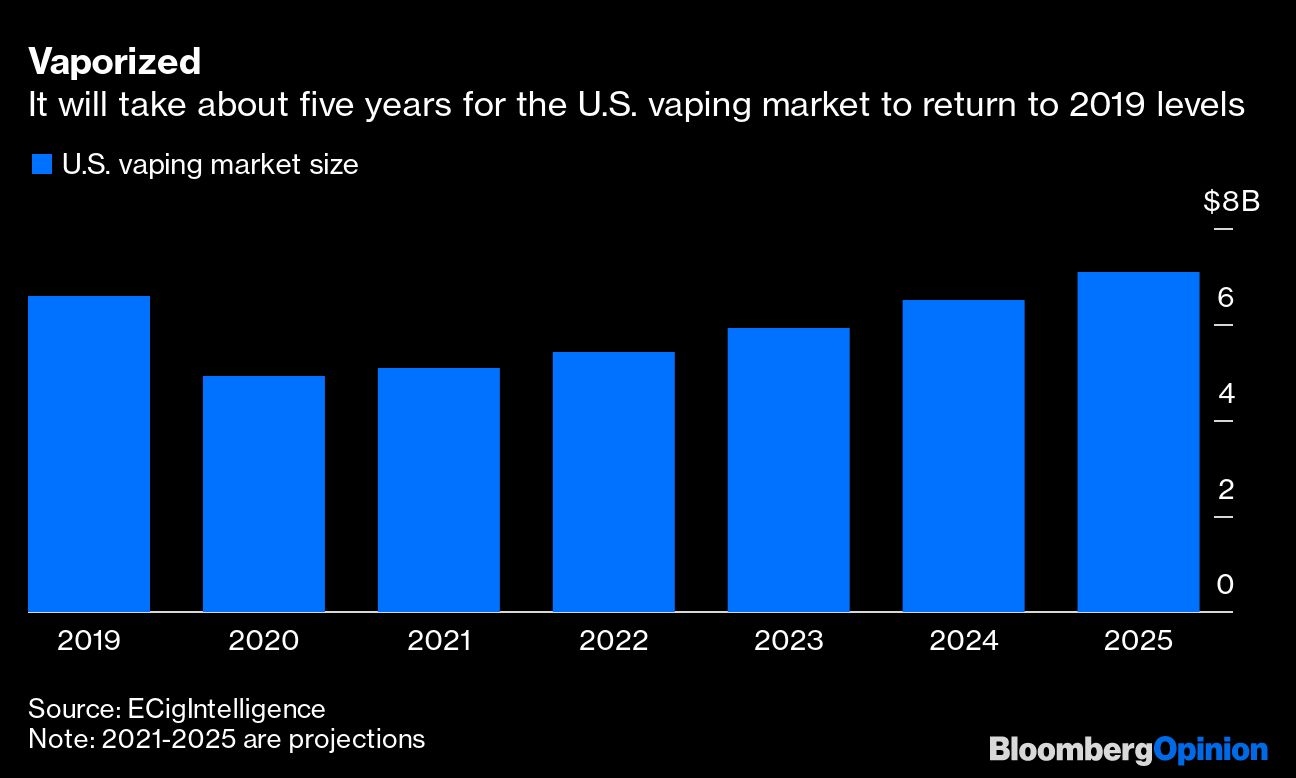 But U.S. electronic cigarette sales appear to be recovering this year, according to Nielsen data, and despite the maelstrom, they are still poised to grow much faster than cigarettes. The vaping crisis has also eased up, as it’s become clearer that the lung problems publicized two years ago were most likely not caused by legal e-cigarette cartridges, but by black-market versions containing THC, the psychoactive ingredient in marijuana, diluted with Vitamin E acetate. Meanwhile, the percentage of U.S. high-school pupils vaping declined in 2020.

Devices that heat tobacco are another growing alternative. These are particularly popular in Japan, where they account for 28 per cent of the total market, but are catching on in Europe and the U.S. Philip Morris on Tuesday upgraded its earnings outlook on the strength of its IQOS heated tobacco product. 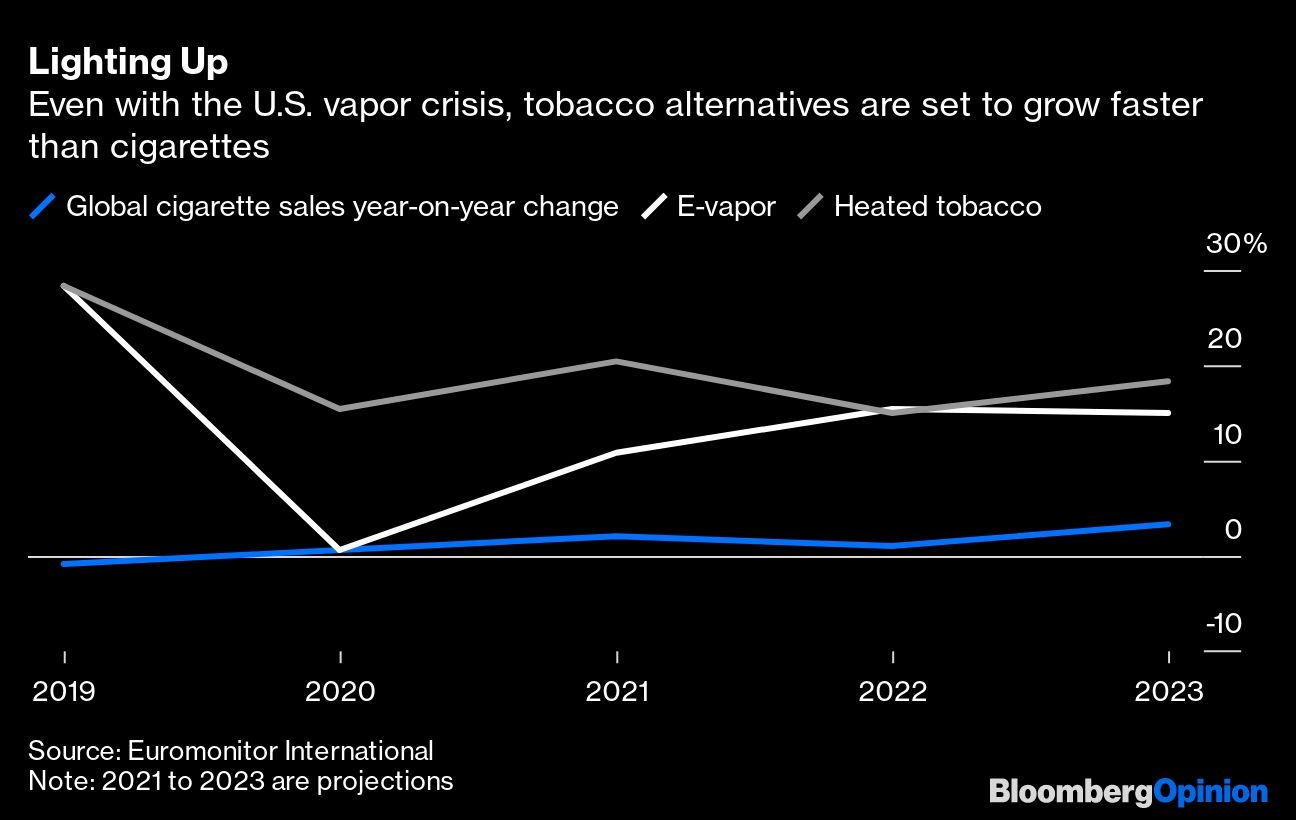 If the U.S. government does indeed cut nicotine levels in cigarettes and bans menthol flavors, there could be an even faster switch to nicotine replacement products, such as vapes and pouches, according to Bloomberg Intelligence. And vaping technology holds promise for delivering other types of products too, from cannabis to medicines. Big Tobacco has to stay focused on developing these substitutes. And a slower decline in its traditional business right now means more cash to invest elsewhere.

Philip Morris has spent more than US$8 billion on its smoke-free products, which made up 28 per cent of revenue in its first quarter this year. British American Tobacco has spent more than 5 billion pounds (US$7 billion) developing a broad portfolio — including vaping, heat-not-burn, oral tobacco and most recently cannabidiol — that it hopes will generate as much in sales by 2025, approaching 20 per cent of the total. It’s not clear which category, if any, will win out, so having options is wise.

Migrating from cigarettes to vapes, nicotine pouches and increasinly cannabis won’t be a straight line for Big Tobacco, as the U.S. vaping crisis demonstrated. And those heavy investments come with risks. (Remember Altria’s US$12.8 billion stake in Juul Labs Inc., which it later had to write down?)  But the industry has little choice but to plough on if it wants to avoid some stress smoking of its own.