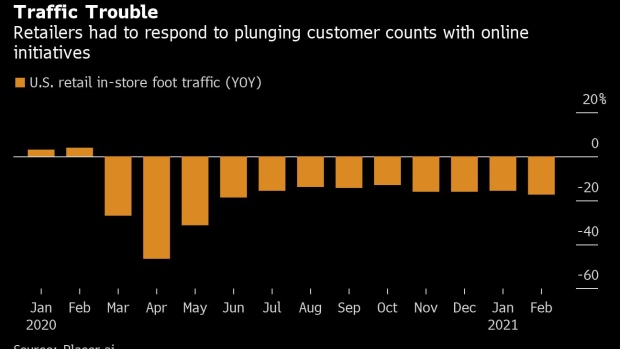 (Bloomberg) -- A year of Covid-19 has dramatically accelerated the transformation of big-box stores into e-commerce warehouses, causing ripple effects for hourly workers and a struggling real estate sector.

Shopping center mainstays Walmart Inc., Best Buy Co. and others are becoming fulfillment centers where workers assemble local deliveries and socially distanced consumers wait in parking spaces for their trunks to be filled. Space once devoted to t-shirts and TVs will now be used to pick and pack online orders or generate revenue by displaying ads for big brands like Samsung.

There’s no going back because consumers have embraced the web like never before during the pandemic. Stores will be smaller and integrated with digital operations, or risk becoming irrelevant.

“Today's customer is in charge,” said Mark Cohen, director of retail studies at Columbia Business School. “They are no longer handcuffed to the mall near their home. They can browse anywhere and buy anywhere. They are calling the shots, and they will not relinquish that.”

It was a year ago this week when Covid’s alarming spread pushed retailers big and small to shutter. Sales plummeted overnight, triggering a rash of store closures, layoffs and bankruptcies. Meanwhile, chains deemed essential by local governments, including Walmart, Kroger Co. and Home Depot Inc., stayed open and reaped the rewards of booms in cooking and home upgrades as Americans stayed put.

But as the pandemic fades, spending will shift back to dining out, travel and other leisure experiences—putting more pressure on chains to keep making shopping easier to meet these new consumer expectations. This next phase of retail could be as agonizing for the industry as the initial boom in e-commerce more than a decade ago that wiped out lots of companies. Much like then, chains that don’t evolve quickly, or have the resources to do so, will struggle to survive.

“What you will see this year is a rethinking of store space, and how we use it,” said Mary Brett Whitfield, who leads the shopper insights research team at consultant Kantar. “Retailers will downscale the size of the store that’s shoppable.”

Heading into the pandemic, the U.S. still had the most retail square footage per capita in the world—remnants of a boom starting in the late 1980s. But Covid triggered record store closures and a reassessment of how to use physical space. That could bring more pain to lower-tier malls and city retail. Those sectors have suffered the biggest declines in occupancy rates, rents and valuations, according to CBRE Group Inc., a real estate services firm. They will lead an estimated 20% contraction in retail real estate inventory over the next five years, the group said.

And the retail industry is betting some of the trends that have ignited this rethinking of space will outlast the pandemic. For example, nearly three-quarters of consumers who tried a different shopping method or brand last year intend to continue with it, according to a survey by McKinsey & Co. Whether it’s more home-cooked meals or commuting less, “the vast majority of that behavior is going to last,” Walmart Chief Executive Officer Doug McMillon said last month.

In response, strategic moves that retailers had planned for upcoming years got pushed into 2020. Lowe’s Cos., Best Buy and Tractor Supply Co. built curbside pickup systems on the fly so customers wouldn’t have to enter stores. The rollouts were often clunky, but are being refined. Take Target Corp., whose mobile shopping app now allows drive-up customers to choose exactly where in their car they want their bags placed.

In Target’s case, 12 million customers who previously only shopped one way—in stores, or online—began to do both last year. Those using digital options like its drive-up service displayed a higher rate of “stickiness,” or likelihood to shop again, Chief Executive Officer Brian Cornell said.

And the answer isn’t always found online. Target is also opening new “mid-sized” stores that bridge the gap between traditional big boxes and its small-format locations, while Burlington Stores Inc. recently doubled its long-term expansion target to 2,000 locations, most of which will be shrunk-down versions of its coat emporiums.

At Best Buy, the electronics retailer reduced the square footage devoted to displays by nearly half in a handful of locations. That frees up space to fulfill digital orders, which accounted for 43% of sales during the holiday quarter, up from 25% just a year ago. The smaller sales floors contain fewer items, a shift from the chain’s heyday when it displayed row upon row of gadgets. An initial test of four stores worked well enough that Chief Executive Officer Corie Barry is expanding it.

“The customer has completely changed the way they are thinking of shopping,” Barry said. “We are doing all we can to adjust to that new reality.”

Walmart’s status as the nation’s biggest grocer paid off last year with restaurants closed and Americans taking most meals at home. Concerns over entering stores convinced millions of Americans to embrace online grocery shopping for the first time last year, boosting sales 54% to nearly $100 billion, according to data tracker eMarketer.

But that surge taxed Walmart’s army of 170,000 employees who dash through aisles to fill orders for its online grocery service. The world’s largest retailer responded by carving out space in its cavernous outlets for automated micro-fulfillment centers that store and pick items, making the process faster and more profitable. The company has a few in operation now and plans to open more than 100 of them in the next few years.

Alert Innovation Inc., a startup that designs these futuristic systems, says its technology will allow for “a new kind of supermarket,” one where shoppers can still browse for that perfect steak while robots assemble the rest of their order. With grocery-industry sales expected to decline in 2021 for the first time in more than 20 years, according to UBS analyst Michael Lasser, food stores need to take steps now.

International retailers are adapting as well. The European owners of the Zara and H&M apparel chains both plan to reduce their store counts in 2021 and put more focus online. With supply chains upended by the pandemic, Zara owner Inditex SA benefited from investments it made years ago to add radio frequency identification, or RFID, tags to its garments, providing a real-time view of its inventory of blouses and skirts.

Stores in the U.S. and abroad will also increasingly serve as proving grounds for alternate, more profitable sources of revenue, such as advertising, health care and financial services. Walmart, Target and Kroger have seen the massive advertising unit Amazon.com Inc. created and want to do the same by delivering ads for big brands both online and through interactive displays in their stores. Walmart said last month that its nascent advertising platform, Walmart Connect, will be bigger than those of media giants like Fox Corp. and Twitter Inc. within five years.

Retailers “have to get away from just selling items,” Dan Stanek, an executive vice president at retail consultants WD Partners. “It’s all being rethought now.”