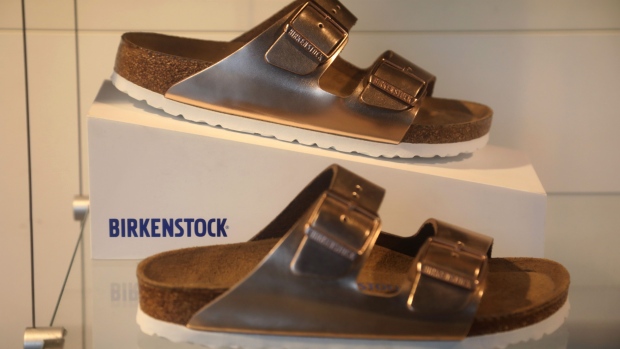 Sandals in the window display of a Birkenstock GmbH footwear store in Berlin, on Jan. 19. Photographer: Liesa Johannssen-Koppitz/Bloomberg , Bloomberg

(Bloomberg) -- Iconic family-controlled brands from Panini SpA to Birkenstock are putting themselves on the block, as their wealthy owners look to capitalize on surging valuations for consumer companies.

Panini, maker of the popular soccer stickers collected and traded by fans around the world, is weighing a potential sale, according to people familiar with the matter. The Italian publishing house has drawn interest from suitors including buyout firms, the people said, asking not to be identified discussing confidential information.

Birkenstock’s family owners have also been exploring a sale of the German sandal maker, which could be valued at more than 4 billion euros ($4.9 billion) including debt, Bloomberg News first reported in January. Consumer-focused private equity firm L Catterton has pulled ahead in the bidding, people with knowledge of the matter said this month.

Both brands have long histories and legions of loyal followers. Panini was founded six decades ago in Modena, Italy, and has sold stickers for every FIFA World Cup since the 1970 tournament in Mexico. Huddles of collectors trading cards are a familiar sight ahead of major competitions. Complete Panini sticker collections and rare single-card items can fetch high prices in the collectors’ market, and the company surpassed $1 billion of annual sales in 2018.

While Birkenstock launched its sandals in the 1960s, the brand’s roots stretch all the way back to 1774, when Johann Adam Birkenstock was working as a cobbler in the German state of Hesse. That heritage has appealed to shoppers who gravitate toward products with a back story.

Private equity firms have been drawn to the cachet of historic brands, which can be leveraged to boost sales and attract investors through an eventual initial public offering. In 2017, CVC Capital Partners bought Breitling SA, the Swiss watchmaker known for the aviation-themed timepieces worn by actor John Travolta. Other family-owned luxury companies, from jewelry house Bulgari to cashmere specialist Loro Piana, have sold out to become part of conglomerates like LVMH.

Booming stock prices are helping underpin valuations for private companies and convincing tight-knit family shareholders to let go of prized assets. The MSCI World Consumer Discretionary Index has jumped 43% over the past year, hitting a new record high this month. That’s more than double the performance of the broader MSCI World Index and nearly as much as the tech-heavy Nasdaq Composite Index.

The frenzy for consumer brands is also showing up among new listings. British bootmaker Dr. Martens Plc had enough investor demand to complete its 1.3 billion-pound ($1.8 billion) IPO just an hour after it started taking orders. Its shares have risen 31% since their trading debut last month, and the company is now valued at 47 times this year’s estimated earnings, according to data compiled by Bloomberg.

Deliberations on a potential sale of Panini are at an early stage, and there’s no certainty they will lead to a formal sale process, the people said. A representative for Panini Group couldn’t immediately be reached for comment.

Many of the world’s rich have been revamping their portfolios amid the coronavirus crisis. Wealthy businessmen from Virgin founder Richard Branson to German industrialist Heinz Hermann Thiele have sold stakes in their biggest listed assets. Most recently, Peter Hargreaves offloaded a big chunk of his stock in U.K. investment firm Hargreaves Lansdown Plc.

In November, the billionaire behind Louis Dreyfus Co. agreed to sell a 45% stake in the storied agricultural trader to Abu Dhabi sovereign wealth fund ADQ, opening the firm to outside ownership for the first time to secure desperately needed cash for its owner.