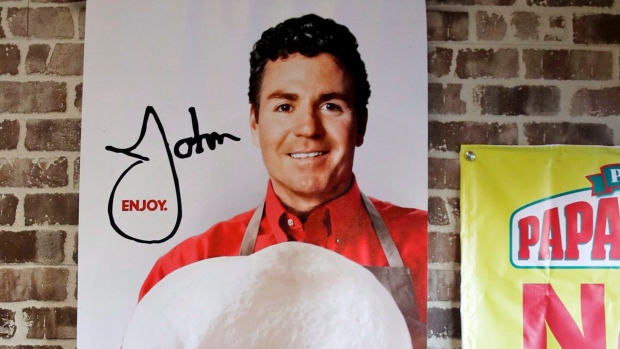 Papa John’s International Inc.’s ousted founder John Schnatter sued an advertising firm for secretly taping a conversation with him and then allegedly selectively leaking his comments to make it sound like he backed the use of racial epithets as part of a billing bill.

Schnatter, who was ousted last year when the comments became public, claims they were taken out of context and that he had been criticizing a well known public figure for using a racial slur, according to a lawsuit he said he filed Thursday in state court in Kentucky. He sued media agency Laundry Service and its parent, Wasserman Media, which handled some Papa John’s advertising.

Casey Wasserman, the head of Wasserman Media, created a campaign to discredit Schnatter over a commercial dispute, according to the lawsuit. Wasserman told Papa John’s then-Chief Executive Officer Steve Ritchie he would “bury the founder” if Laundry Service was not paid $6 million it said it was owed, said Schnatter, who gave up the CEO title in 2017.

“Defendants’ intentional and/or reckless leak of information from the call” was designed to “extract retribution from the company and Mr. Schnatter for Papa John’s terminating Laundry Service as a media buyer,” according to a copy of the suit provided in a statement. The complaint couldn’t be immediately verified in electronic records for Kentucky’s state courts.

Jo Hardy, a Wasserman spokeswoman, didn’t immediately return a call or email for comment Thursday on Schnatter’s suit. Casey Wasserman, an entertainment and sports executive who serves as the chairman of the Los Angeles Organizing Committee for the 2028 Olympic Games, declined to comment on the suit.

Schnatter resigned as the chain’s chairman after Forbes magazine published a July 2018 story describing Schnatter’s meeting with officials of Laundry Service, a Wasserman unit, in which he was portrayed using a racial slur.

The chain, which got an investment earlier this year from activist investor Starboard Value LP, has been working to mount a comeback following a sales slump and the scandal involving Schnatter’s alleged slur use. Schnatter settled a lawsuit against Papa John’s in March.

In an interview last week with local media in Louisville, Kentucky, Schnatter -- still a major shareholder -- cryptically suggested multiple times that viewers “stay tuned” for more on his next steps.

Schnatter says he was criticizing other public figures’ uses of a racial slur in the May 2018 meeting, which touched on whether the chain should hire singer Kanye West to push its pizza. The executive told advertising officials “he never” used the slur.

Two months later, Forbes published a story entitled: ‘Papa John’s Founder Used N-Word on Conference Call,” and the public outcry -- which included the removal of Schnatter’s name from buildings at several universities -- prompted the executive’s ouster, according to the suit.

“Defendants’ actions were intentionally calculated to cause Mr. Schnatter severe emotional distress,” according to the suit.