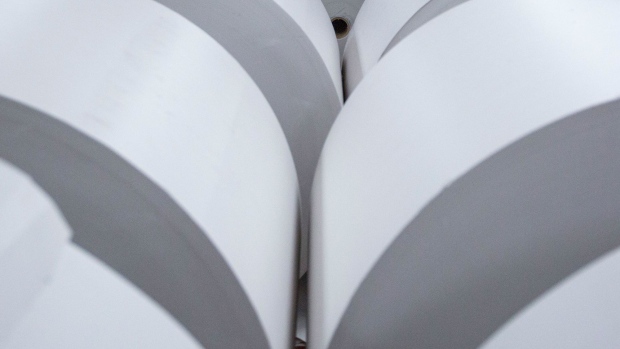 Jason Campbell adjusts rolls of newsprint before printing at The Columbian newspaper on April 18, 2018 in Vancouver, Washington. , Photo by Natalie Behring/Getty Images

Paper Excellence Group is seeking as much as US$400 million from the sale of a British Columbia pulp mill, people with knowledge of the matter said, as it works to satisfy the Canadian competition regulator’s requirement for its US$3 billion acquisition of Domtar Corp.

The closely-held pulp and paper manufacturer has started sounding out prospective buyers for Domtar’s Kamloops mill, the people said, asking not to be identified because the information is private. Bank of Montreal is advising on the disposal, Domtar said in an emailed statement in response to Bloomberg queries.

Paper Excellence offered US$55.50 a share in cash to take rival Domtar private last year. Domtar, which has about 6,000 employees, will operate as a standalone business, according to a press release at the time.

As part of the deal, Paper Excellence agreed to sell Domtar’s pulp mill in Kamloops to resolve the Canadian Competition Bureau’s antitrust concerns.