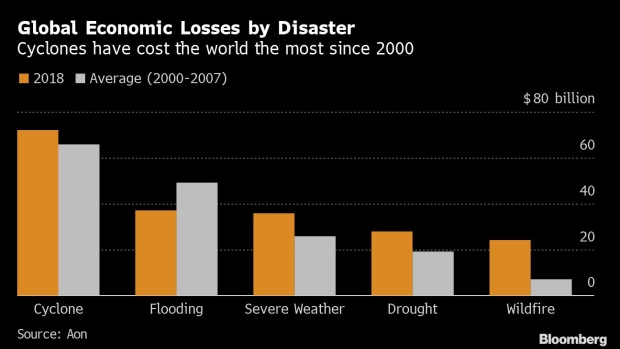 BUZI, MOZAMBIQUE - MARCH 24: People wade through flood waters in a rural neighborhood affected by Cyclone Idai on March 24, 2019 in Buzi, Mozambique. Emergency personnel are beginning to deliver aid into rural areas where rescues have been much tougher. Thousands of people are still stranded after after storm hit the country last week. (Photo by Andrew Renneisen/Getty Images) , Photographer: Andrew Renneisen/Getty Images Europe

(Bloomberg) -- Two of the worst storms ever recorded hit developing nations this year, supercharged by rising global temperatures. Now there’s an international push to link the billions of dollars in devastation to climate change and compel rich, industrial nations to pay.

From the Bahamas to Mozambique, many of the nations better known as exotic holiday destinations are increasingly blaming climate change for more violent storms passing through. They’ve raised the issue at a United Nations conference that continues this week in Madrid.

Envoys from almost 200 nations are talking about how to compensate countries for the impacts of global warming. This logic has been at the core of international climate diplomacy for three decades: not all countries should shoulder equal costs for a shift in the environment caused by burning fossil fuels.

“Developing countries are not responsible for climate change,” Brazil Environment Minister Ricardo Salles said in an interview in Madrid. “Responsible is mainly the rich world that engaged in industrial activity for a very long time.”

The envoys at the COP25 meeting are discussing how to design a “loss and damage” mechanism that would spread around those costs. While their work is at a very early stage, the idea is that it would cover climate-related events such as extreme weather and rising seas.

It’s become one of the most divisive issues in climate talks, since expectations are rising with every storm and the richest nations are concerned they’re being asked to write a blank check.

A series of powerful storms this year added urgency into the debate. In March, for example, Cyclone Idai tore through several African safari countries including Mozambique, Malawi and Zimbabwe, killing more than 1,300 people. Hurricane Dorian sat atop the Bahamas for days in August, leaving behind the Caribbean nation’s worst-ever disaster, with a reported $3 billion in damage. That saw a dip in visits to its idyllic beaches, reducing its GDP by 25% in the wake of the storm, according to the World Meteorological Organization.

For Belize, another country known for spectacular beaches and crystalline waters, the problem is especially acute. The Central American nation is in the throes of a drought that caused a partial state of emergency. The UN’s International Panel on Climate Change projects sea levels could rise as much as 1.1 meters (3.6 feet) within the lifetime of children born today, which would wipe out 73% of the country’s major hotels and holiday destinations.

“We stand on the front line of climate change, and once you lose the front line you lose everything,” Janine Coye-Felson, deputy permanent representative of Belize to the UN, said in an interview.

While richer nations could absorb that sort of impact, it hits with a harder wallop in places like Belize. Like many other developing nations, its economy relies on tourism and agriculture. With a GDP of just $1.9 billion in 2018, there isn’t much room for unaccountable climate damage.

Climate-related disasters in high income countries caused $1.4 trillion in economic losses over the past 20 years, which shaved just 0.4% off economic activity, according to the UN Office for Disaster Risk Reduction. In developing nations, $21 billion of losses cut output by almost 2%.

Those risks are growing. The reinsurance company Munich Re counted a record $160 billion of losses from natural disasters in 2018. That included $57 billion for tropical storms and $24 billion for wildfires.

It’s increasingly one of the most prominent issues in the developing world, making it a central issue at the UN meeting. Some countries at the UN talks are focused mainly on the loss and damage mechanism, sensing it’s already too late to rein in the greenhouse gas pollution causing the problem.

“Developing countries are looking for a way forward to have a serious political discussions about finance,” said Alden Meyer, who has been tracking the UN talks for more than two decades at the Union of Concerned Scientists, U.S. non-profit group. “If there’s no progress, that’s going to be a pretty big issue for them. There’ll be a lot of anger.”

For African nations, severe drought upset agricultural cycles, driving up food price inflation 6% this summer. The cost of corn, used to prepare food in most Kenyan homes, rose as much as 25% in July alone, pushing over 600,000 people into “acute malnutrition,” according to the Kenyan Government’s 2019 rains season assessment report.

Belize has a prime role in the debate as chair of the Alliance of Small Island States, a group of nations with an out-sized voice at the UN talks. Unchecked climate change will cost the whole of the Caribbean as much as $22 billion a year by 2050, according to a 2011 report by the Caribbean Community Climate Change Center, which is based in Belize.

Developing nations say now is the time rich countries to start enhancing promises by setting up a range of responses for different situations. On the shopping list are funds that are geared to relieving disasters and building resilience. They also want direct investment from bodies like the Green Climate Fund and better access to data to help them prepare for what lies ahead.

“Climate funding is a risk, but there is a need for a resilience fund,” Edmund Bartlett, Jamaica’s minister for tourism, said in a phone interview. “Developed countries must recognize that their markets are dying and what are those markets – the developing countries.”

To contact the authors of this story: Jeremy Hodges in London at jhodges17@bloomberg.netWilliam Wilkes in Frankfurt at wwilkes1@bloomberg.net

To contact the editor responsible for this story: Reed Landberg at landberg@bloomberg.net