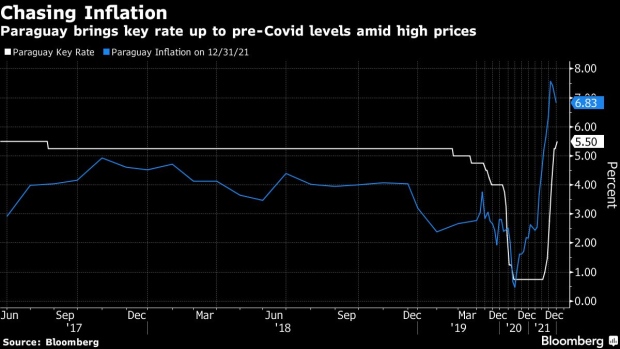 (Bloomberg) -- Paraguay’s central bank hiked its benchmark interest rate by 25 basis points to 5.5%, increasing rates for the sixth month in a row, as inflation expectations show signs of peaking.

The central bank warned that rising crude prices and the expectation of a rate hike by the Federal Reserve were risks to local inflation even as a drought and the pandemic weaken the outlook for economic growth, leading it to curb the pace of its rate increases, according to a statement. Policy makers raised their key rate 450 basis points last year as inflation surged to a 10-year high on rising food and imported fuel prices.

After peaking at 7.6% in October, inflation slowed in the the following two months to finish 2021 at 6.8%. Officials expect inflation will reach 4.5% during the fourth quarter of 2022, close to the midpoint of its target range between 2% and 6%.