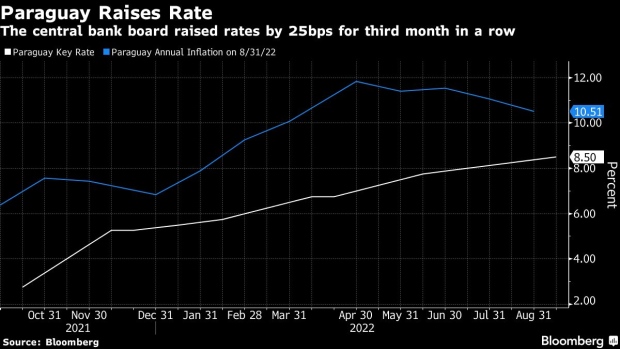 The Central Bank of Paraguay in Asuncion, Paraguay, on Thursday, Dec. 23, 2021. Paraguay's central bank hiked its benchmark interest rate by 125 basis points for a third straight month to 5.25% with inflation still running at its fastest pace in a decade. Photographer: Santi Carneri/Bloomberg , Bloomberg

(Bloomberg) -- Paraguay lifted its benchmark interest rate to an 11-year high of 8.50% as months of consumer price increases have sent inflation expectations above the central bank’s target.

Policy makers signaled that they expect consumer prices to continue slowing in the coming months.

“An expected reduction in electricity fees from September to December should contribute to lower the annual rates of inflation through the end of the year,” the central bank said in the statement.

Paraguay and its Latin American peers continue to raise borrowing costs to prevent food and energy driven inflation from spilling over into other goods and services. After peaking at a 14-year high of 11.8% in April, the annual pace of consumer price increases slowed to 10.5% last month.

Explaining their caution with Thursday’s tightening, policy makers noted in their statement that “although inflation expectations for the monetary policy horizon have stabilized, they stand at 4.5%, still above the 4% target.”

The central bank expects inflation to reach target in early 2024.