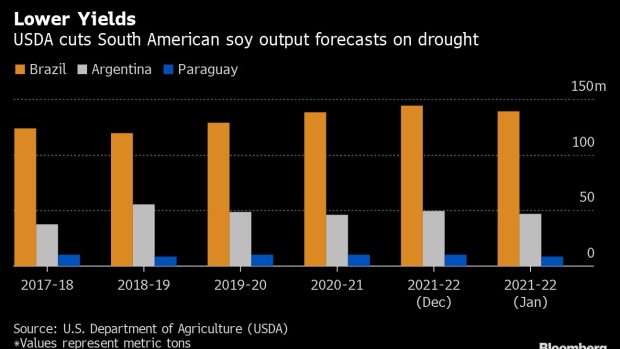 (Bloomberg) -- Paraguayan agribusiness giant Cooperativa Colonias Unidas probably will harvest less than half its original forecast this year as a deep drought stunts crops across South America’s farming belt, according to a senior manager.

Production of 150,000 to 160,000 metric tons would mean around $100 million less revenue for the cooperative, whose members farm about 120,000 hectares (297,000 acres) in the southern provinces of Itapua and Alto Parana, said Eduardo Dietze, who oversees farm supplies and technical assistance.

“That’s money the farmer won’t have to reinvest in construction and improvements,” Dietze said in an interview.

Hot, dry weather in December and early January has analysts and trade groups lowering their estimates for soy production in key producers Argentina, Brazil and Paraguay, helping push up prices of the oilseed by about 12% since the end of November.

In a good year, Paraguay produces just over 10 million metric tons, with more than 90% exported as beans, oil and pellets to markets including Argentina and Brazil. But this year, farmers will be lucky if the first harvest reaches two thirds of its usual yield of about nine million tons, according to trade group Capeco.

With the cooperative facing its worst first soy harvest in two decades, some of its 2,200 farmers will seek additional revenue from a smaller second harvest later in the year, he said.

CCU, as the 68-year-old cooperative is known, ranks among the country’s largest soy producers, with farming and processing of the oilseed accounting for about 39% of its 2.9 trillion Guarani ($416 million) revenue in 2020.

Members are trying to make their fields more resistant to unpredictable rainfall by adopting no-till farming and rotating soy with corn and sorghum to improve soil fertility and water retention.

“Even though the area planted with soy might decline, we expect production to remain around 400,000 tons” with those methods and enough rain, said Dietze, himself a third generation soy farmer.

The cooperative is also increasing grain, pork and dairy production to trim its dependence on soy. Those plans include more than doubling annual corn production to as much as 250,000 tons in the next five years.

Dietze, 49, thinks that diversification will also help CCU convince young people to earn a living from the land by offering them more employment options. CCU isn’t completely insulated from the global aging trend in agriculture as younger generations eschew a way of life they view as dirty, dangerous and unglamorous.

“We see that livestock complemented by farming in coming years will generate opportunities for young people to find jobs in the sector,” Dietze said.