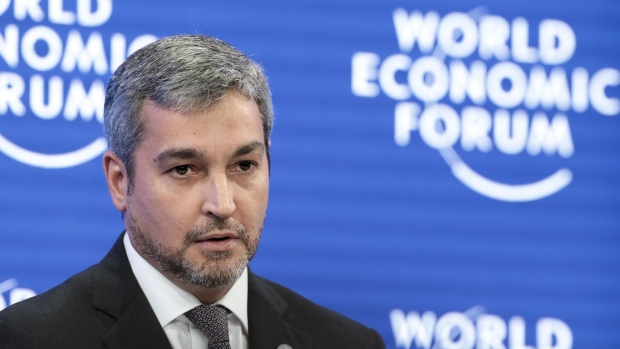 (Bloomberg) -- President Mario Abdo Benitez sought to defuse a diplomatic kerfuffle after he told the Financial Times that Taiwan should invest $1 billion in Paraguay if it wants to remain allies with the South American country.

In a webcast press conference Thursday, the day after the FT interview was published, Abdo Benitez denied conditioning his support for the Southeast Asian country, reiterating the nations will remain strategic allies during his government. The countries have to show Paraguayans benefits of that relationship because a future president might be less supportive of Taiwan, he added.

“What we are doing with Taiwan, and they are helping me, is working on an agenda where our objective is to attract at least $1 billion of Taiwanese investment,” he said.

Paraguay is one of the biggest economies in a shrinking list of countries, including Guatemala and Honduras, that recognize Taiwan and not mainland China. The 65-year-old relationship between the two countries dates back to when anti-communist presidents Alfredo Stroessner and Chiang Kai-Shek ruled in Asuncion and Taipei. The two dictators never met, though Stroessner paid a state visit to Taiwan in 1975 accompanied by his personal secretary, the father of Abdo Benitez.

Taiwan has provided hundreds of millions of dollars in financial and humanitarian aid to its South American ally over the years. Although bilateral trade hit a record $196 million in 2021, it represented less than 1% of Paraguay’s total trade that year.

“There is Taiwanese investment of more than $6 billion in countries which don’t have diplomatic relations with Taiwan, we want from that $1 billion to be put in Paraguay,” the Financial Times quoted Abdo Benitez saying in an interview. “That will help us to build the argument about the importance of this strategic alliance with Taiwan.”

Paraguay’s soy and beef exporters have indirectly benefited from China’s demand for foodstuffs through high global prices for both commodities. However, farmers and ranchers have become increasingly concerned that Paraguay’s special relationship with Taiwan isn’t translating into business opportunities at the same time they remain locked out of China’s vast market.

In early 2021 at the height of the pandemic, the Abdo Benitez administration said it had been offered vaccines in exchange for recognizing Beijing. The foreign minister at the time, Euclides Acevedo, publicly demanded that the U.S. and Taiwan show “proof of their love” for Paraguay.

With Abdo Benitez scheduled to finish his five-year term in August, it will likely fall on his successor to determine whether the Paraguay-Taiwan relationship celebrates a 70th birthday.

China’s Communist Party views Taiwan as its territory, which must be taken by force if necessary and often shuns countries that recognize it as independent. The government in Taipei rejects Beijing’s claim, insisting Taiwan is already a de facto sovereign nation.