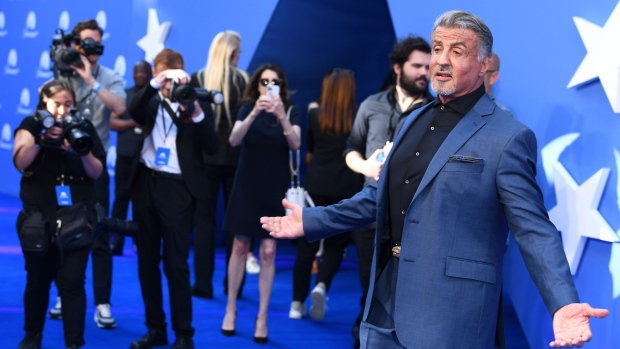 (Bloomberg) -- Paramount Group Inc. launched its streaming service in the UK and Ireland, joining a long list of content providers vying for viewers’ attention just as inflation-conscious Brits plan to cut back on groceries and gas.

Sylvester Stallone, Kevin Costner and Jessica Chastain, who all have shows on the Paramount+ platform, were among the stars who attended a cocktail party in London’s theater district on Monday to celebrate the launch. But with high-profile competitors already in the market and talk of a recession growing, analysts questioned the timing.

“Obviously it’s not ideal,” said Tom Harrington, an analyst at Enders Analysis, in an interview. “They’re launching at a time that seems late, there’s a squeeze on household finances, and also everyone’s a little bit down on streaming and the future of video.”

UK Consumers Most Worried in Major Economies About Inflation

The New York-based media conglomerate, formerly called ViacomCBS, is following rivals such as Apple TV+ and the Walt Disney Co., which launched Disney+ during UK pandemic lockdowns when customers were stuck at home. The US market is already showing signs of saturation after households stopped adding new streaming services after two years of constant increases, according to a survey from research company Kantar.

Still, Paramount Chief Financial Officer Naveen Chopra said he’s optimistic about how the service would perform in a recession and that it’s a “very good time” to roll it out.

“Home entertainment has actually been very resilient in times of economic uncertainty, and the reason for that is that television viewing and even movie-going provide tremendous value relative to other forms of leisure and entertainment,” Chopra said in an interview on Bloomberg TV on Wednesday.

At £6.99 a month, Paramount+ is £1 cheaper than Disney+ and the same price as Netflix’s least-expensive tier. As of the first quarter, the Paramount streaming service had signed up about 40 million subscribers globally.

“It’s obvious that streaming is the future of video,” Enders Analysis’s Harrington said. “But short-term, it’s quite a difficult pitch to the consumer, especially in the UK.” That’s because Britain’s pay-TV industry has been more stable compared to US cord-cutting.

Stallone made the biggest splash at the preview event in London’s West End this week, where the 75-year-old action star ignored the teleprompter, joked he’d be “dead soon,” and told the story of how he met “Yellowstone” writer Taylor Sheridan after he was interrupted shoveling out horse stalls.