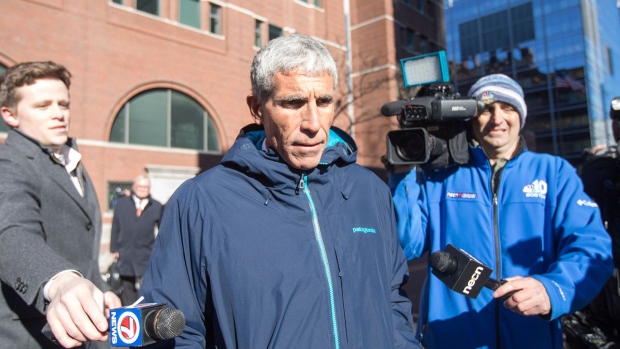 (Bloomberg) -- California real estate executive Bruce Isackson was worried when the mastermind of a massive college admissions scam told him he was being audited by the IRS. So he invited William “Rick” Singer to his home for a confidential chat.

“I’m so paranoid” about the scheme Singer had lured him into, an agitated Isackson told the corrupt admissions strategist. “I don’t even like talking about it on the phone.”

What he didn’t know was that Singer was wearing a wire and the FBI was listening in. The recording, played in federal court in Boston this week, was so damning that Isackson and his wife became the first parents to plead guilty in the sprawling case, admitting they paid Singer $600,000 to get their two daughters into the University of California at Los Angeles and the University of Southern California as purported athletes. The couple awaits sentencing.

Isackson, who told jurors he is hoping for leniency in exchange for his testimony, was the government’s first witness in the trial of John B. Wilson, 62, a private equity investor, and Gamal Abdelaziz, 64, a former Wynn Resorts Ltd. executive. They are accused of conspiring with Singer to pay bribes to get their kids into USC as phony athletic recruits. They’re the first of a half dozen parents still fighting federal charges to go on trial, after 33 others pleaded guilty.

Prosecutors called Isackson as a witness Monday in an effort to show jurors that Singer manipulated parents into knowingly bribing their kids’ way into college. The government also appeared to be deploying Isackson against the defense’s claims that Singer kept parents in the dark about the scam.

Both Wilson and Abdelaziz argue they were duped by Singer and believed the funds they paid him weren’t bribes but legitimate donations.

Isackson, who continued his testimony Tuesday, gave jurors a glimpse of how Singer wheedled parents, promising them a “bulletproof” way of ensuring their children got into elite schools.

“He made us feel that we needed him more than he needed us, even though we were paying him for his services,” Isackson said.

Isackson said the couple agreed to continue with the scheme even after Singer left a threatening voicemail on his wife’s phone in April 2016, accusing them of trying to run their own bribery scam with a soccer coach at the University of California at Santa Barbara and cut him out.

“I can tell you right now she’s not getting into Santa Barbara and I’m going to do everything to ruin your daughter’s reputation,” jurors heard Singer say on the call. “Tell Lauren that wherever she’s going, she’s over. You and your husband are horrible people, horrible.”

Lawyers for both Abdelaziz and Wilson grilled Isackson over whether he was testifying against their clients because he was trying to spare his wife and himself prison terms. He acknowledged he had no personal knowledge of the cases against either parent, had never met Abdelaziz and had met Wilson only once at a fundraising event.

“You’d pretty much do anything to stay out of prison?” asked Brian Kelly, a lawyer for Abdelaziz.

“I don’t know where you’re going with that question,” Isackson said.

None of the colleges or students in the case were charged. The trial continues Wednesday with the testimony of FBI agents.