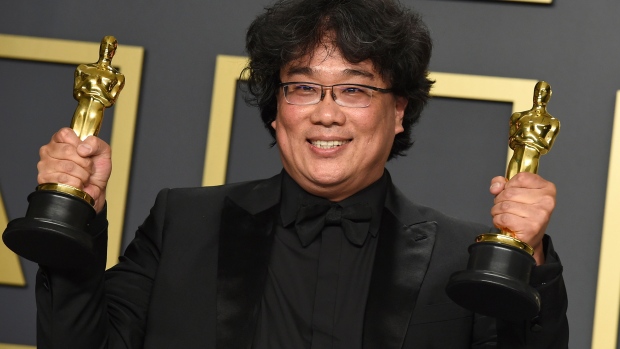 Bong Joon Ho poses in the press room with the awards for best director for "Parasite" and for best international feature film for "Parasite" from South Korea at the Oscars on Sunday, Feb. 9, 2020, at the Dolby Theatre in Los Angeles. , Photo by Jordan Strauss/Invision/AP

Bong Joon Ho, who made the film, was crowned best director Sunday at the 92nd Academy Awards in Hollywood, another first. His film also captured Oscars for best original screenplay and top international picture.

The victory was a defining moment in the globalization of Hollywood, which had previously favored homegrown films over foreign-language fare. With Asian directors increasingly grabbing the spotlight -- and the region poised to be home to the world’s No. 1 movie market -- “Parasite” is a harbinger for the industry.

“I’m ready to drink tonight,” Bong said, when accepting his best director award. The surprise win recalled the 2017 win for “Moonlight,” a little-seen art-house picture. “Parasite” has generated just US$35 million in U.S. box office sales, though it’s collected $165 million in all thanks to foreign markets.

“Parasite” explores class differences with the tale of an unemployed family that entrenches itself in the life of a wealthy clan. The win for a foreign film is a break from tradition at a time when the motion picture academy is under fire for failing to diversify its ranks and awards. It’s also a blow for Netflix Inc., which aggressively campaigned for many of the night’s top awards.​

​The award victory is certain to add to the windfall for its U.S. distributor Neon and possibly Hulu. Hulu signed a deal with Neon in 2017 to distribute its titles after their theatrical release. Neon has since become a powerhouse. It was also behind “Honeyland,” which was nominated for two Oscars this year, and “I Tonya,” which won an Oscar in 2018 for Allison Janney’s performance.

The Oscars played out as a showdown between old Hollywood and new. Netflix garnered the most nominations of any studio, with 24, and spent heavily promoting its two best-picture hopefuls this year -- “Marriage Story” and “The Irishman.“ Made by Martin Scorsese, “The Irishman” failed to win a single award after being nominated 10 times.

Netflix itself grabbed only two Oscars -- for the documentary “American Factory” and for “Marriage Story,” which scored an award for supporting actress Laura Dern.

Still, the ceremony was a showcase for new faces -- like Bong and Taika Waititi, who made “Jojo Rabbit” and is part Maori.

The academy has been criticized in recent years for the lack of diversity in its ranks and nominations. This year, not a single female was nominated for for directing, and 19 of 20 acting nominations went to to white performers.

As a result, diversity became an early topic on stage, starting with the opening number, when actress and singer Janelle Monae called out the lack of female representation. Immediately after, presenters Steve Martin and Chris Rock delivered barbs in an opening exchange that criticized the slow progress.

The awards for Bong -- who largely spoke through a translator -- and Waititi provided a counterweight. Waititi won best adapted screenplay in his tale about a German family that hides a Jewish girl in World War II. His father is of Maori descent and he dedicated his award for best adapted screenplay to indigenous children who want to be artists.

Other big winners included Sony Corp., which took home four awards, including for costumes in “Little Women” and a best supporting actor prize for Brad Pitt in Quentin Tarantino’s “Once Upon a Time... in Hollywood.” Joaquin Phoenix took home the top acting prize for his performance in “Joker,” while Renee Zellweger won best actress for her role as Judy Garland in “Judy.”

Netflix wasn’t the only streaming service targeting awards. The Amazon.com Inc.-distributed film “Les Miserables” was nominated for one Oscar in the best international feature category. Founder Jeff Bezos looked on from the audience -- and withstood a handful of jokes about his great wealth and divorce from Rock.

“1917,” which was the favourite for best picture, ended up garnering mostly technical Oscars, including statuettes for cinematography, sound mixing and visual effects.

The old Hollywood verses new also played out in some of the commercial spots during the show.

Quibi, a startup aiming to disrupt how Hollywood operates, ran spots for its service during the awards -- its second high-profile ad, after a Super Bowl commercial last week. Backed by tech veteran Meg Whitman and Hollywood mogul Jeffrey Katzenberg, Quibi launches in April with the promise of lavishly produced videos that are less than 10 minutes long.