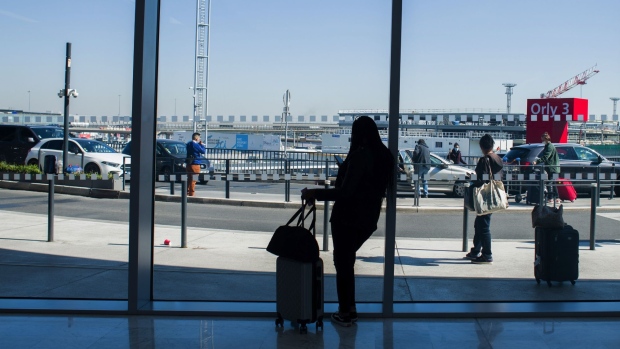 A traveler uses a smartphone in Terminal 3 of Orly Airport, operated by Aeroports de Paris, in Paris, France, on Tuesday, April 27, 2021. France is moving toward a broad rollout of digital health certificates, putting the country at the forefront of a European Union push for vaccine passports to jumpstart travel. Photographer: Nathan Laine/Bloomberg , Bloomberg

The reopening of transatlantic flights to the U.S. is “great news” for Paris, but it won’t bring air traffic back to where it was before the pandemic, according to the operator of the city’s airports.

Paris serves as a hub to connect various continents, and “as long as Asia is closed, notably China,” all incoming traffic to Paris that normally goes to China from Africa, Latin America or North America is being slowed down, Aeroports de Paris Chief Executive Officer Augustin de Romanet said during a media event at Paris Charles de Gaulle airport on Wednesday.

“As long as this stickiness exists, we fear we may not return to 2019 levels of traffic,” he said.

Romanet said he still expects pre-pandemic traffic to return between 2025 and 2027. For this year, he predicts between 30% and 40% of 2019 levels. ADP will most likely deploy more staff for the expected increase in passengers once flights to the U.S. resume to minimize waiting times, he said.

U.S. authorities said on Monday they will allow entry to most foreign air travelers as long as they’re fully vaccinated against Covid-19. The new rules are due to start in early November.

There are signs that pent-up demand for travel is helping drive retail sales at airports, even without Asian travelers. Sales at LVMH’s Moet Hennessy duty free store have increased by “double digits” from 2019, CEO Philippe Schaus said at the same event, citing purchases from U.S. visitors and others.

Schaus expects performance at “Les Caves Particulieres” (Private Cellars), located in Charles de Gaulle’s terminal 2E, will “boom” even more once visitors from China are back.