The first families of French luxury are at it again, firing up a race to gather the world’s brightest baubles and fanciest fashions under their rival houses.

Only days after the Arnaults’ LVMH snapped up jeweler Tiffany & Co. for US$16.2 billion, word surfaced of a possible riposte from the Paris giant’s crosstown rival, the Pinaults’ Kering SA. The Gucci owner has held exploratory talks with Italian skiwear maker Moncler SpA about a potential acquisition, according to people with knowledge of the matter.

“We had expected the LVMH-Tiffany news to catalyze a round of industry consolidation — which Kering-Moncler would be a part of -- but the race seems to have gotten underway even more swiftly than imagined,” said Swetha Ramachandran, investment manager of the GAM Global Luxury Brands Fund.

The rivalry, more than two decades in the making, has defined the modern luxury industry and shows no signs of ending. Since 2001, when Kering founder Francois Pinault beat out LVMH Chief Executive Officer Bernard Arnault for control of Gucci, the companies have increased their hold over the sector through dozens of deals.

Kering has announced at least US$14.7 billion of acquisitions since 1995, according to data compiled by Bloomberg, compared with at least US$45.5 billion for LVMH. Each family’s wealth has increased vastly as the companies integrated their purchases and rode a wave of demand in China.

As their dominance over the business has grown, the two families have broadened the playing fields on which they compete. The Pinaults and Arnaults have bought up neighboring vineyards in Burgundy, set up separate art museums in Paris and even one-upped each other with contributions to the rebuilding of Paris’s fire-ravaged Notre Dame Cathedral.

On one scorecard, Arnault has a clear lead. He’s the richest person in Europe with a US$101.8-billion fortune, after adding US$33 billion this year alone, according to the Bloomberg Billionaires Index. Pinault, whose son Francois-Henri now runs Kering, has a net worth of US$38.7 billion, up US$9 billion in 2019.

Sprawling structures like those of Kering and LVMH — which owns brands ranging from Louis Vuitton to Christian Dior to Dom Perignon — have gone out of style in other industries. But there’s no conglomerate discount for these giants.

Combining many different brands under one umbrella lets LVMH and Kering pool functions like purchasing and information systems, while feeding investment to those that need it most, as individual labels ride the ups and downs of consumers’ changing tastes.

With a market value of more than 200 billion euros, LVMH is one of the biggest companies in Europe. Its rival, which owns Saint Laurent, Boucheron jewelry and Brioni suits, trails at 68 billion euros, but Gucci has been the fastest-growing major luxury brand over the past few years.

As the bigger player, LVMH has led the way in turning new acquisitions into drivers of growth. While Arnault has had a few missteps, including purchases of Donna Karan and Marc Jacobs and unsuccessful runs at Hermes International and Gucci, deals for the likes of Bulgari jewelry, Givenchy and Christian Dior have paid off handsomely. LVMH has pushed newly acquired brands upmarket with a sharper focus on marketing and store presentation, boosting profits.

Kering’s offerings include Ulysse Nardin watches, fashion labels such as Alexander McQueen and Bottega Veneta, but it’s less diversified than LVMH. The company has become increasingly dependent on Gucci, which provided more than three-quarters of its operating profit in the first half of the year. That’s putting pressure on Kering to hedge against the risk that demand for the Italian brand’s new looks could fade. Hence the possible interest in Moncler, which has a market value of about US$12 billion. 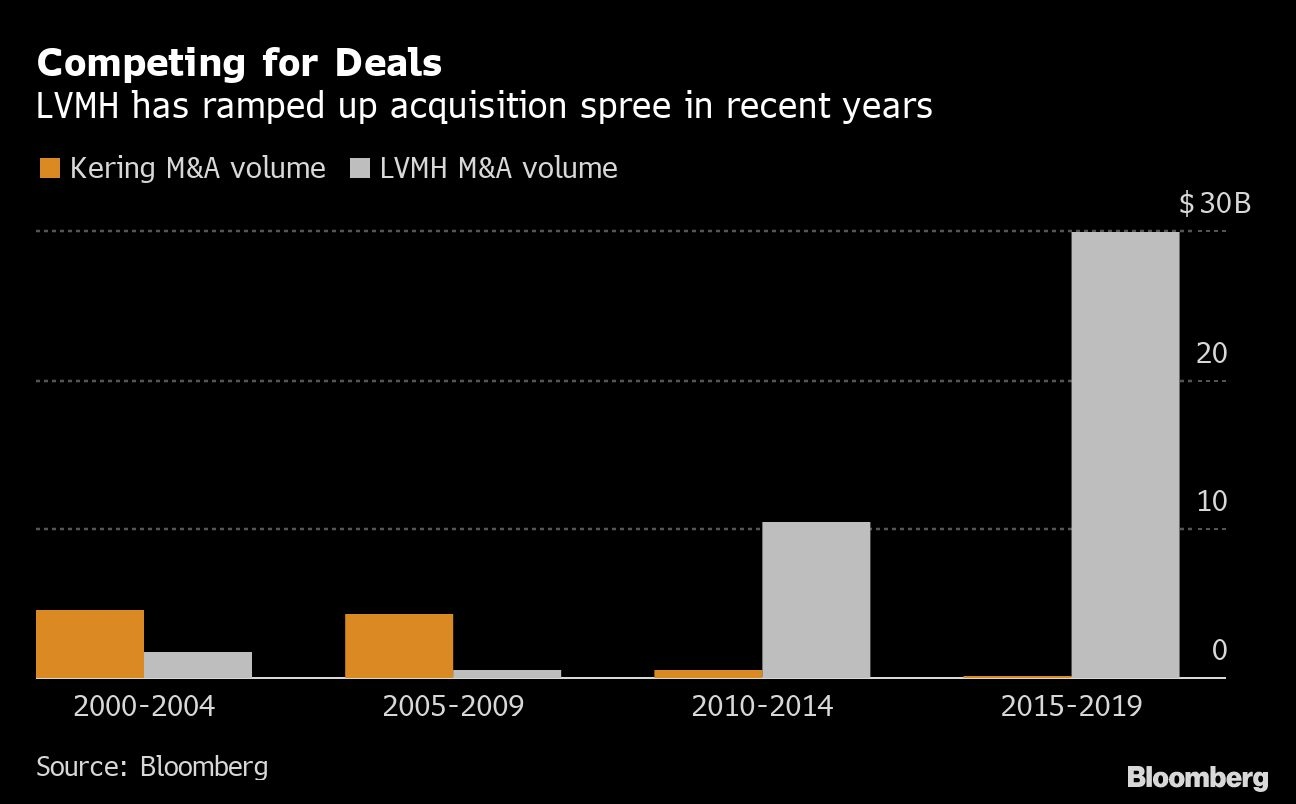 To secure the maker of puffy down jackets worn on the ski slopes of St. Moritz and at the World Economic Forum in Davos, the Pinaults will need the backing of another luxury billionaire. Moncler Chairman Remo Ruffini’s holding company owns a 22.5-per-cent stake in the company, valued at about US$2.5 billion.

Moncler confirmed that it’s had contacts with Kering, saying there are no concrete proposals. A representative for the French company declined to comment.

So successful have the Pinaults and the Arnaults been that others elsewhere have sought to emulate the conglomerate approach, but so far their acquisitions have been limited to second-tier brands. Capri Holdings Ltd., the U.S. parent of Michael Kors, has added Italian label Versace and Jimmy Choo. Tapestry Inc. owns Coach, Kate Spade and Stuart Weitzman. China’s Shandong Ruyi has talked of turning itself into an Asian LVMH.

With many Italian luxury labels already acquired and others struggling, that means the global luxury business is increasingly controlled from Paris.

“Competition is the mother of invention,” Luca Solca, an analyst at Sanford C. Bernstein in Geneva, said. “The rivalry between LVMH and Kering — or between Arnault and Pinault, if you really want to personalize it — has brought the creation of two incredible companies that sit at the top of the modern luxury goods industry.”

--With assistance from Tom Metcalf, Ben Scent and Geraldine Amiel.