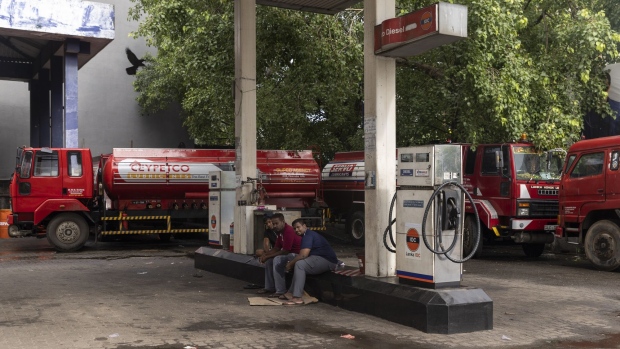 A street vegetable vendor pushes his cart next to the three-wheelers queuing for fuels in Colombo, Sri Lanka, on Monday, May 16, 2022. Sri Lanka has been rattled by power cuts, food shortages, and a currency in free fall, which fueled protests and pushed Prime Minister Mahinda Rajapaksa to resign. , Bloomberg

(Bloomberg) -- Sri Lanka’s parliament is set to reconvene in a four-day session that could see lawmakers vote in a new deputy speaker and weigh in on the financial crisis after Prime Minister Ranil Wickremesinghe warned of further hardship the day before.

The new government plans to sell its national airline to stem losses, part of efforts to stabilize finances even as authorities are forced to print money to pay government salaries. Wickremesinghe warned the next couple of months will be the “most difficult ones of our lives.”

The Attorney General has directed the police to arrest lawmakers involved in a violent clash last week between supporters of former prime minister Mahinda Rajapaksa and protesters calling for his resignation and that of his brother President Gotabaya Rajapaka, local media reported.

The lawmakers belonged to the Rajapaksa’s Sri Lanka Podujana Peramuna, according to reports.

The country will impose power cuts for May 17 again after two days of continuous power supply on public holidays, the Public Utilities Commission said. Prime Minister Ranil Wickremesinghe had previously warned of up to 15 hours of blackouts.

The nation has only one day’s stock of gasoline and the government is working to obtain dollars in the open market to pay for three ships with crude oil and furnace oil that have been anchored in Sri Lankan waters, Wickremesinghe said.

Wickremesinghe said he was forced to permit the printing of more money to pay salaries, accepting that it would add pressure on the rupee. The government will present a new ‘relief’ budget for this year to replace the current spending bill, he said, adding that he expects a 13% budget deficit for 2022.

The prime minister is yet to appoint a finance minister to lead bailout talks with the International Monetary Fund.

Harsha de Silva, a senior lawmaker from the main opposition Samagi Jana Balawegaya, says he’s willing to head parliament’s Public Finance Committee rather than be a part of a government “that lacks legitimacy.”

Workers groups across the country will on Wednesday begin a three-day nationwide strike against the arrest of protesters involved in last week’s clashes, an umbrella organization of the country’s trade unions said in a statement. The demonstrators were instigated by the actions of the pro-government groups, they said.

“It has been decided that the trade unions will hold nationwide protests on the 18th, 19th and 20th demanding an immediate halt to the arrest and interrogation of the public who have responded to the thugs’ actions in defence of the thugs,” the statement added.

Sri Lanka will reimpose an islandwide curfew from 11: 00 p.m. Monday until 5:00 a.m. Tuesday, the president’s media unit said in a statement. The curfew, first imposed after violence erupted May 9, had been lifted since early Sunday to allow people to celebrate a Buddhist religious holiday.

Wickremesinghe will make a televised address to the nation at 6:30 p.m. Monday, his media office said. It gave no other details.