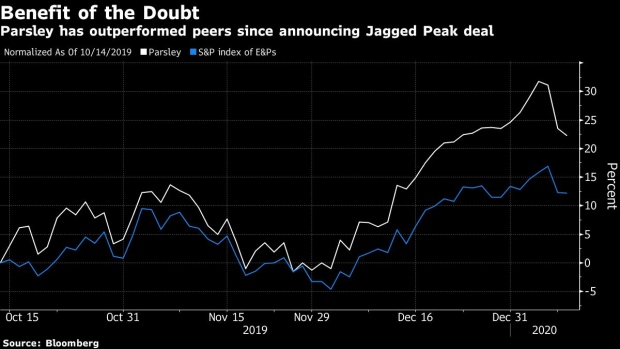 Drill pipe sits on a rack near a Nabors Industries Ltd. rig drilling for Chevron Corp. in the Permian Basin near Midland, Texas, U.S., on Thursday, March 1, 2018. Chevron, the world's third-largest publicly traded oil producer, is spending $3.3 billion this year in the Permian and an additional $1 billion in other shale basins. Its expansion will further bolster U.S. oil output, which already exceeds 10 million barrels a day, surpassing the record set in 1970. Photographer: Daniel Acker/Bloomberg , Photographer: Daniel Acker/Bloomberg

(Bloomberg) -- This is the year when shale drillers are finally going to deliver solid returns to investors that have grown weary of the industry’s decade-long cash burn, the head of explorer Parsley Energy Inc. said.

Why? Because for the first time the producers behind the U.S. shale boom are collectively showing restraint in capital spending at a time when crude prices are rising and struggling oil-service providers are lowering their rates, Parsley Chief Executive Officer Matt Gallagher said in an interview. In the past, explorers would instead have taken advantage of that to drill at full throttle again.

“It’s the proof-in-the-pudding year,” Gallagher said. “We’ve been telling generalists in the financial community that you’re going to get a payday for investing in this great renaissance.”

Whether investors will be easily convinced is yet to be seen. After Wall Street poured more than $200 billion in a growth-focused, debt-driven shale patch in past years, most drillers have yet to produce free cash flow that would ensure healthy returns. The S&P index of exploration and production companies fell 11% last year, even as oil jumped 34% in New York.

But Parsley might have more reasons to be optimistic than others. The Austin, Texas-based company on Thursday won shareholder approval to acquire rival Jagged Peak Energy Inc. for $1.8 billion.

It’s a deal that Gallagher had to hit the road and man the phones for in order to convince investors of its potential. After an initial negative reaction that sent the stock plunging 11% the day the deal was announced, the shares have rebounded 22% since. That’s about double the gain for S&P’s E&P index over the same span, at a time when the market has mostly punished buyers.

Even as he’s still putting the finishing touches on the Jagged Peak takeover, Gallagher reiterated that the newly merged company is a good takeover target.

“It’d be very attractive to a lot of companies,” Gallagher said, declining to name possible suitors. “I don’t think that anything done in this deal would negate that.”

Gallagher, who took over as CEO from Parsley founder and chairman Bryan Sheffield last year, expects a continued throttling back of U.S. oil growth, to an expansion of about 500,000 barrels a day in 2020, with even slower growth through 2025.

That’s roughly half the annual growth expected by the U.S. Energy Information Administration. American output ended 2019 at a record level of nearly 13 million barrels a day, more than any other nation and up from less than 12 million at the start of last year, according to weekly EIA data.

This will finally be the year that investor skepticism is eased, Gallagher predicts.

“I think 2019 was the inflection year: We saw these glimmers of hope that the shale leaders can print free cash flow,” he said. “And 2020 is going to see free cash flow in spades.”

To contact the editors responsible for this story: Simon Casey at scasey4@bloomberg.net, Carlos Caminada, Christine Buurma