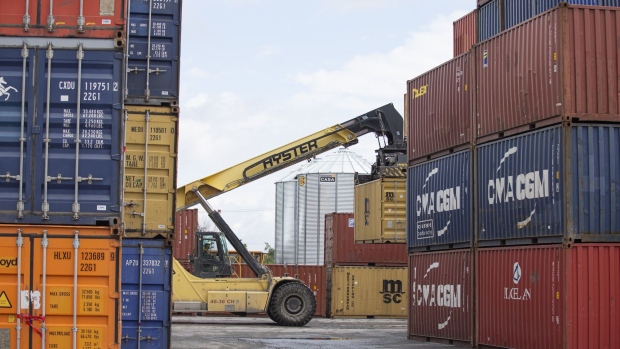 Shipping containers at Ray-mont Logistiques Inc. in Montreal, Quebec, Canada, on Friday, Aug. 21, 2020. A strike at the Port of Montreal is showing few signs of progress deep into its second week, as concerns rise about the damage an extended shutdown could do to the Canadian economy, the Dow Jones reported. Photographer: Christinne Muschi/Bloomberg , Bloomberg

A partial strike scheduled to start Wednesday by Port of Montreal dockworkers threatens to increase congestion in other parts of North America and further waylay shipments at a time of surging shipping costs and delays.

Longshoremen at eastern Canada’s biggest port will work regular shifts Monday through Friday without overtime hours and refusing to work weekends. This comes after the Montreal Employers Association stated it will exercise its right to lockout, the workers’ union said, following drawn-out contract negotiations.

The port’s capacity is now expected to drop by 30 per cent, Montreal Port Authority Chief Executive Officer Martin Imbleau said in a statement.

This threatens to add another complication to the global shipping industry already straining to move goods without high costs and long waits. Container carriers are already struggling with port congestion from the U.K. to Singapore, where logjams and delays are expected to worsen with 83 container ships already waiting in queue, according to supply-chain data provider project44.

Many small- and medium-sized businesses rely on shipments that pass through Montreal, which feeds into Canada’s most populated regions and where dockworkers handled 1.6 million containers holding 35 million metric tons of goods and commodities last year. About two-thirds of the tonnage was bulk products like oil, fertilizers and iron ore.

A global influx of ship traffic is expected as many of the nearly 400 ships caught up in the Suez Canal blockage, which ended two weeks ago, will arrive at their destinations in Europe, Asia and the east coast of North America.

The decreased working hours follow a series of rotating strikes by Montreal dockworkers in 2020. The port took three months to get back to normal after last year’s strike, Chamber of Commerce of Metropolitan Montreal President Michel Leblanc said at an online press conference Tuesday.

Some companies have already redirected shipments to the port of Halifax, which is costing some of them as much as $1 million (US$800,000) a week, said Quebec Manufacturers and Exporters association President Veronique Proulx at the conference.

“It’s the employer who shot first by modifying the work conditions,” Michel Murray, spokesman for the union that represents Montreal longshoremen, said in a 98.5 FM radio interview on Monday. “Longshoremen are asking to have a better work-life balance.”

This is more than double the average annual income of $47,100 in the province of Quebec, Statistics Canada data show.