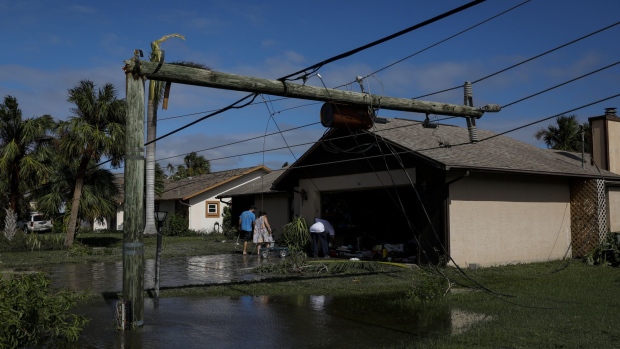 A broken utility pole on a flooded street following Hurricane Ian in Fort Myers, Florida, US, on Thursday, Sept. 29, 2022. Hurricane Ian, one of the strongest hurricanes to hit the US, weakened to a tropical storm but continues to dump rain on the state as it makes its way up the US Southeast. , Bloomberg

(Bloomberg) -- Some Florida residents in areas hardest hit by Hurricane Ian face the prospect of being without power for more than a month.

Lee County Electric Cooperative, a local utility in southwest Florida, said parts of its electric-distribution network need to be rebuilt, meaning it’ll be weeks before many of its customers regain power. The cooperative’s customers include some residents and businesses in counties that encompass Fort Myers and Sanibel Island -- communities devastated by the Category-4 hurricane.

With the storm damaging a bridge to the barrier island, crews will need to transport utility equipment by barge, said Karen Ryan, a spokeswoman for the cooperative.

Ian clobbered Florida’s power grid despite billions of dollars spent by the state’s utilities to harden it. The hurricane’s devastation is the latest example of how extreme weather -- which scientists say is being made worse by climate change -- is overwhelming infrastructure largely built during the last century.

As of mid-day Friday, more than 213,000, or 89%, of Lee County Electric Cooperative customers lacked power, with most of those in Lee and Collier counties, Ryan said. Statewide, nearly 1.8 million customers lacked electricity, according to PowerOutage.US.

“While they rebuild homes and businesses, we will rebuild the infrastructure so that it is ready when they are able to receive power,” she said.

(Updates with number of electric-cooperative customers without power in penultimate paragraph.)