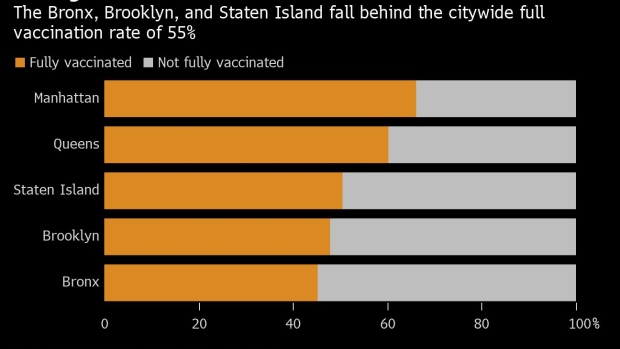 (Bloomberg) -- New York City, once the epicenter of the Covid-19 pandemic, is hitting a plateau in vaccinating enough of its population against the virus. In the ZIP codes with the lowest participation rates, reasons for resisting the shot range from mistrust and misinformation to inaccessibility and indifference.

In Far Rockaway, Queens, only 34% of residents are vaccinated, according to data from the city’s health department. Dmitriy Gelfand, who owns the Smartshop Pharmacy on Beach Channel Drive, says demand for shots has dissipated since March and he now has 200 Moderna vaccines he’s struggling to give away.

“What can you do? You can’t push everybody, you can’t force it,” he said. “Some are afraid and say they don’t know what it’s going to do to them. Others say it’s not the right time.”

Despite pop-up sites, home-delivered shots, offers for luxury hotel stays and $100 pre-paid debit cards, about 55% of the city’s total population is fully vaccinated. That’s roughly 400,000 people short of the city’s goal to fully inoculate 5 million by June. It also means more than 2 million eligible New Yorkers remain unvaccinated and vulnerable as the delta variant drives an uptick in reported cases.

The biggest holdouts are mostly Black and Orthodox Jewish communities in the outer boroughs, where 17 ZIP codes have vaccination rates of 40% or less. That includes the Brooklyn neighborhoods of Bedford-Stuyvesant, Midwood, Canarsie, Ocean-Hill-Brownsville, Crown Heights and Borough Park. Participation rates have also lagged in politically conservative areas of Staten Island. In Far Rockaway, all three groups predominate. In some cases, those areas have lower vaccination rates than Mississippi.

New Yorkers’ reasons for resisting the vaccine echo those across the country: Some people are worried about the vaccine’s short- and long-term side effects; others question its rapid development and emergency use without approval from the U.S. Food and Drug Administration. City Health Commissioner Dave Chokshi is not discouraged.

“We’ve seen worse than where we are right now over the course of the pandemic,” he said. “The difference is that we now have the vaccine. We have the tool that can end the pandemic.”

Black New Yorkers are the least vaccinated group, with a 31% participation rate. Asian New Yorkers, meanwhile, have the highest at 71%.

Among Black Americans in general, there’s a deep distrust of the government and pharmaceutical companies.

“We’re raised with the skepticism of the government when it comes to vaccines,” said Henry Butler, district manager for the community board in Bedford-Stuyvesant, which at 36% has the second lowest vaccination rate. “As Black Americans we know our history of medical exploitation and disparity of care.”

Last week, the city brought back a mobile vaccination site in the heart of Butler’s district, which according to the U.S. Census is 72% Black and 15% Hispanic.

The site gave out 39 shots last Friday, the start of the city’s $100-cash incentive -- 12 more than the previous day, but only about four per hour.

“I’m not trusting the government, to be honest,” said Tony Rome, 61, one of dozens who walked past the mobile site that day. He also singled out Johnson & Johnson, which faces lawsuits alleging that its talcum powder can cause cancer. The company’s vaccine was linked to rare instances of blood clots.

“There’s not enough information about its long-lasting effects,” said Rome.

Jake Sargent, a spokesperson for J&J, said clinical trials have demonstrated “the efficacy of the J&J single-shot COVID-19 vaccine, including against viral variants that are highly prevalent” and that the results are consistent across demographics.

The city has tried using trusted members of the community to promote the vaccines’ effectiveness and safety.

The Bethany Baptist Church in Bedford-Stuyvesant served as a vaccine site earlier this year, giving out 300 shots. Adolphus Lacey, the church’s pastor, said he promotes the vaccine to his congregation during Sunday services but doesn’t force the issue.

“It’s frustrating because you don’t want to insult their intelligence,” he said. “People don’t like to be shamed. I want to respect them. So you create the space for them to be honest about what they fear.”

At the United Methodist Center food pantry in Far Rockaway last week, Adebanji Adedipe, 64, a Nigerian immigrant, was one of two people waiting to be served lunch who said he wasn’t vaccinated. He said he’s been told the shot could cause impotence, heart failure, paralysis and mental problems.

No matter how much a health educator tried to persuade him that the vaccine is safe, Adedipe said he remained skeptical. When asked where he got his information, he said he heard it from friends. “I read it on Facebook, so I’m confused.”

In the Orthodox Jewish community, which was hit hard by the virus last year, there’s a fear that the vaccine can cause infertility, according to Alisa Minkin, a pediatrician on a Covid-19 task force organized by the Jewish Orthodox Women’s Medical Association.

Some who recovered from Covid believe they have immunity and don’t need the shot. Others are concerned about mRNA technology, the vaccine’s quick development and its emergency approval rather than full approval from the FDA.

“A lot of people in this community are very savvy,” said Minkin. “But they’re not trusting.”

To make matters worse, some Orthodox Jews felt unfairly singled out when Governor Andrew Cuomo and Mayor Bill de Blasio called out wedding parties, funerals and other gatherings held during the height of the pandemic.

“They felt very targeted,” said Minkin. “That flares up distrust even more.”

That has hindered vaccinations, said Nesha Abramson, director of community health outreach at Vaad Refuah, a community organization in Midwood, where the vaccination rate is 38%.

“We need to stop treating folks who are hesitant as ‘out there’ and nuts,” she said.

Scheduling, logistics and accessibility are the other keys to reaching more New Yorkers. Sometimes it’s a matter of a mobile vaccination site sitting in the same place for more than a day. Other times, it’s ensuring that vaccine information is translated into other languages.

The city says it’s spent more than $60 million on advertising and promoting the vaccine on subways, television and radio.

Even the city’s recent $100 incentive had its hiccups. At a vaccination site at the Mosholu Library in the Bronx, an area where about 44% are fully vaccinated, some people showed up expecting cash or a gift card. They were disappointed to have to register for a pre-paid debit card online, said Nikki Edwards, a nurse who has given hundreds of shots as part of the city’s vaccine program.

“It actually discouraged people to the point where they don’t take the vaccine,” she said Saturday. “Elderly people don’t have time or sophistication to access it and young people want the money now. Several families showed up with kids as young as 12 and protested when they heard you have to be 18 to get the money.”

Still, there are signs that more people are getting on board with vaccination. On Friday, the day after the $100 incentive was announced, 14,370 New Yorkers got their first dose — the most since June 4.

For others, money won’t be the motivator. Starting Aug. 16, New Yorkers will be required to present proof of vaccination for indoor activities including dining, working out at the gym and seeing shows.

“The last miles are often the hardest,” said Chokshi. “Some people who may be a ‘no’ today will see everyone else getting vaccinated. Maybe their place of employment will require it. Maybe some of their daily activities will require proof of vaccination, and we’ll get to more and more.”