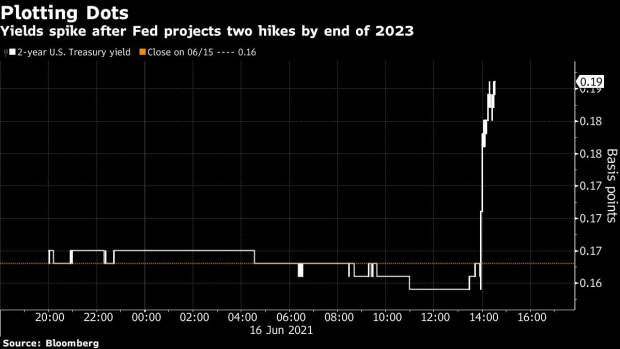 (Bloomberg) -- An impressive afternoon rebound in equities failed to quell a sense among professional investors that rising hawkishness at the Federal Reserve is about to make it tougher for speculators.

While too soon to panic with rate hikes probablly years away, strategists worried Wednesday’s meeting and forecasts would raise pressure at some of the market’s more exuberant fringes.

U.S. stocks fell as much as 1% before recovering, two-year Treasury yields spiked to the highest since June and gold tumbled after central bank officials signaled they expect to raise interest rates twice by the end of 2023, earlier than anticipated just six weeks ago.

“Large cap tech will be fine, but this shift from the Fed is negative for speculative tech. Bottom line.” Dennis DeBusschere, head of portfolio strategy at Evercore ISI, said. “Which is interesting given the recent rally in those names,” he said. “This also lowers the odds of a runaway move higher in the market.”

Here’s what other market participants are saying:

“Look, we’re still talking about 2023 -- let’s put that into context. So policy is going to remain accommodative for some time well into the future and probably more accommodative than it has been if conditions were the same as in the past,” he said. “So to me, tapering is far different than tightening the economy into a recession and we are so many Fed meetings away from that. Think about 2023 just having liftoff. That’s why perhaps this doesn’t have as big of an impact -- I’m sure traders are trying to trade it but we’re still talking a couple of years out to even hike a rate. The Fed this time is going to be so ultra careful to not tighten the economy into submission. They’re going to let it run hot. I think eventually that sanity will filter through to the markets.”

Adam Crisafulli, the founder of Vital Knowledge, wrote in a note:

The Fed’s “prepared materials are more hawkish than expected, specifically the 2023 median dot now standing at two hikes (vs. the Street forecast of one). Meanwhile, the distribution of individual dots signals a more aggressive tightening schedule that forecast. However, we are still talking about something that won’t happen for years to come and while Powell will kick off the taper guidance process at 2:30pm ET, the Fed’s balance sheet is likely to continue expanding into the middle of 2022 (at least).”

“Just as the market was getting comfortable with a patient Fed and inflation considerably above target, the dot plot has shifted. Of course, with a strong economy, recovering labor market and price pressures, although largely transitory, inflation will likely settle at a level above the last decade, and it shouldn’t be a shock to see rate expectations move forward. If anything, this should help anchor inflation expectations around 2%,” she said. “Now it will be up to Powell and other Fed speakers to once again reassure markets that tightening in 2023 doesn’t need to be disruptive. There will still be question marks about the timing of tapering but, overall, the dot plot shouldn’t unnerve the market too much, as long as Powell gets his communication on target.”

“The genie is poking its head out of the bottle -- would expect the leadership change we’ve seen for the better part of a year to show itself again. Value over growth and low duration/credit risk over Treasuries/duration.”

“For stocks, perhaps some investors really thought the Fed would allow inflation to run above 2% indefinitely, or that the weak employment reports recently would somehow change their minds about the intermediate-term trajectory,” he said. “However what we are seeing today is the Fed sticking closely to their own average inflation targeting framework.”

“The market was surprised that so many Fed members forecast moves in 2022 and 2023 in this meeting versus the one in March,” he said. “Many investors are looking to see if Chair Powell makes any mention of tapering. So far markets are taking all of this in stride.”

“What we got in terms of the hawkish surprise was the two hikes in 2023. Notably, this is what Fed futures were expecting, but perhaps not stock investors. Even more interesting is two of the dots went all the way up to 1.625. That’s just bonkers,” he said. “Market reaction is generally what we’d expect: stocks down and yields up in perfect asymmetry, but digging one layer deeper, it’s surprising that value is down more than growth -- generally it’s the growth stocks that get hurt more by higher rates.”

“It’s decidedly a hawkish tilt here. Certainly a quicker path to normalization and hiking rates potentially. As such we see the belly of the curve really under-performing, the 5-year sector is the worst under-performer right now. That’s definitely hawkish in that belly of the curve area. I’m looking at that as bit of a buying opportunity, it might be a bit of an overreaction. Equities are going to be concerned about the fact that at some point the Fed is going to take away the punch bowl. That’s why they’ve been slowly grinding to their all-time highs.”

“This week’s FOMC meeting was expected to be the highlight of the week and it did not disappoint. To go from expectations of Fed liftoff in 2024 to the dot plot projecting two hikes by the end of 2023 likely caught many off guard. Investors are still wondering how the Fed defines terms like ‘transitory’ and ‘substantial further progress.’”

“This is not what the market expected,” he said. “This change in stance jars a little with the Fed’s recent claims that the recent spike in inflation is temporary. If price volatility is temporary then there’s no obvious reason why they need to raise rates sooner than planned, especially with the labor market having disappointed of late. For some it is certainly going to signal deeper concerns about inflation on the committee.”

“The Fed continued to stick to its view that the surge in inflation ‘largely’ reflects ‘transitory factors”’, but officials revised their inflation projections up significantly for this year and the median projection now shows two 25bp rate hikes in 2023,” he said. “We had assumed the Fed would be a little more willing to let inflation rip in favor of ensuring a ‘broad and inclusive’ labor market recovery - and were only forecasting one 25bp rate hike. But we clearly misjudged the Fed’s evolving reaction function and tolerance for inflation.”

“For the time-being we appear to still be in a ‘phony war’, with enough ‘special cases’ in the inflation data to allow for the ‘transitory’ argument to hold sway over the market. This is largely because it is simply too inconvenient (and costly) to admit that we are already experiencing much higher and broader inflation than any mainstream estimate expected, and our concern is that the longer it takes for power of the inflationary impulse to be admitted the faster the adjustment in asset prices is likely to be.”