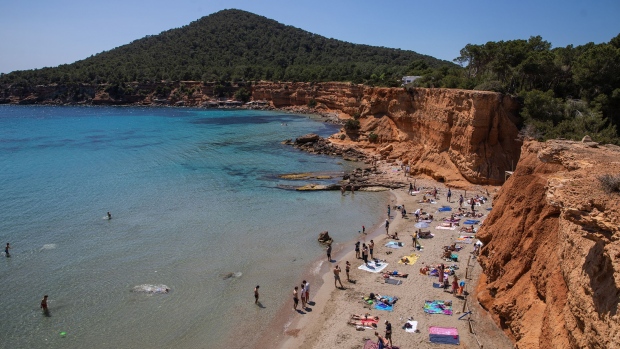 (Bloomberg) -- Russian tycoons are steering clear of the Balearic Sea this year -- usually a favorite hangout among sunny Spanish islands famed for nightclubs and partylife -- to avoid having their megayachts seized.

Best known for the resort islands of Majorca and Ibiza, just one vessel tied to a sanctioned Russian tycoon was spotted in the region this spring after Russia invaded Ukraine and sanctions were quickly imposed, according to an analysis for Bloomberg News by Spire Global Inc., which provides maritime intelligence data.

Want to interact with a tracker of yachts tied to sanctioned Russians? You can here: https://insights.spire.com/maritime/sanctioned-russian-tycoons-yacht-tracker

The Balearic Sea is treacherous water for oligarchs as Spain, Italy and other governments move to seize megayachts, villas and riches to punish Russian tycoons close to President Vladimir Putin. Already, more than a dozen yachts worth over $2.25 billion have been seized.

“Every rich Russian who owns a megayacht, even if they aren’t on sanctioned lists now, they will definitely think twice before moving their yachts to Majorca, Ibiza or anywhere in Europe,” said Denis Suka, an influencer known as the Yacht Mogul. “The sanctions list keeps getting bigger and longer. It’s not safe for any Russian oligarch.”

Spain in April impounded the $95 million Tango superyacht tied to Viktor Vekselberg on behalf of the US while it was in Majorca. At least three others vessels, including the Lady Anastasia that was also on Majorca, have been seized by the Spanish government.

That’s prompted megayachts connected to oligarchs and tycoons on sanctions lists to stay away from the Balearic Sea, a part of the Mediterranean Sea located between eastern Spain, southern France and the Italian island of Sardinia.

“Ibiza and Majorca are favorite destinations for Russians with money,” said Suka. “In the summertime, Ibiza is party central 24/7, but no Russian would take their yachts there now.”

Of the three dozen vessels of sanctioned Russians tracked by Spire, the only one that braved those waters this spring was Solaris, tied to billionaire Roman Abramovich. The ship was anchored in Barcelona when Russia invaded Ukraine on Feb. 24 and quickly cruised out of the region days later, according to vessel data compiled by Bloomberg.

During the spring peak of March and April in 2019 to 2021, at least nine megayachts tied to tycoons on the current sanctions list stopped in the Balearic Sea, often on multiple visits, according to Spire’s analysis. They included the $100 million Graceful that’s been tied to Putin, and metals billionaire Alisher Usmanov’s now-seized $750 million Dilbar.

Since the war started, the luxurious floating palaces have scattered to destinations less likely to seize the vessels. At the top of that list is the waters of the Laccadive Sea, which borders the tropical islands of the Maldives.

At least five have sought the safety of the Maldives and surrounding waters, including the $500 million Nord, linked to steel billionaire Alexey Mordashov. The Nord stopped briefly in Sri Lanka in March as it sailed to the safety of the Russian port of Vladivostok.

“Yachts seem to be looking for comfortable jurisdictions where they can hide out: Seychelles, Maldives, Dubai, Fiji -- expecting them to be far enough from the reach of the sanctions,” said Ian Ralby, chief executive of I.R. Consilium, a maritime security consultancy. “They’re finding that there really is no comfortable safe haven for them.”