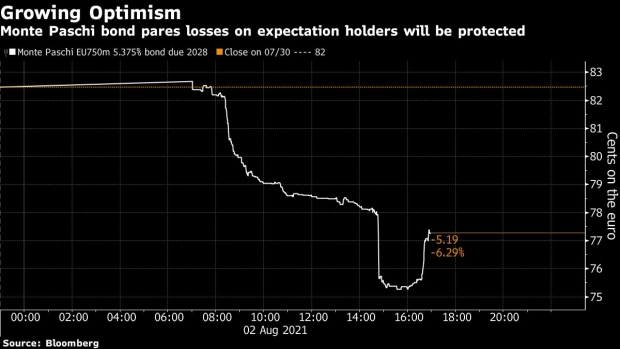 (Bloomberg) -- Banca Monte dei Paschi di Siena SpA’s bondholders are expected to be shielded from any losses in the event of a takeover by UniCredit SpA, according to people familiar with the matter.

UniCredit and the Italian Treasury are looking at options to protect holders of Paschi debt from losses if the deal is finalized, including the possibility for Italy’s second-biggest bank to assume the liabilities of junior bonds, said the people, who asked not to be identified because the matter is private.

While UniCredit and the Italian Treasury have agreed on finding a way to keep a takeover from weighing on Paschi bonds, talks are at a preliminary stage and they haven’t yet discussed specific ways to do that, the people said.

Representatives for Paschi, UniCredit and the Treasury declined to comment.

UniCredit said it started talks to buy Monte Paschi last week, opening the way to the Italian government’s favored solution for the long-troubled lender. The parties have already approved the prerequisites for a transaction that has to ensure capital neutrality, the exclusion of Paschi’s bad loans and all the extraordinary litigation, as well as adequate protection from other potential credit risk.

Monte Paschi’s Tier 2 bonds have fallen as much as seven cents on the euro after analysts warned of potential risks to Monte Paschi’s junior noteholders. UniCredit CEO Andrea Orcel in a conference call on Friday said that talks with Treasury involve a “sub-set” of the Siena-based lender, raising questions on what will be excluded.

UniCredit is set to dig into a complicated due diligence process in August, but the deal is far from sealed.

A strong political outcry -- with all the biggest parties of Prime Minister Mario Draghi’s government opposing the deal -- could complicate its closing, and possibly make it more costly for Italian taxpayers, people said.

Monte Paschi, the world’s oldest bank, has become a burden to the Italian state since it was first bailed out in 2009. After two state rescues and more than 8 billion euros of public money, the lender is still struggling to restore profitability, as the government seeks to exit the troubled lender by a year-end European Union deadline.

Based on the current conditions set by Orcel, the deal could have a price tag of as much as 10 billion euros for the government, taking into account a tax sweetener for banking deals, compensation for thousands of workers that are expected to lose their jobs and the management of Paschi’s legal risks.

The Democratic Party, led by Enrico Letta, has most to lose from a deal which would see Paschi’s outreach in Tuscany wiped out. Letta is running to replace Pier Carlo Padoan as a lawmaker representing Siena after the former economic minister left the seat to become UniCredit’s chairman.

Tuscany’s PD governor Eugenio Giani said that any sale to UniCredit would need to be discussed with unions and that Monte Paschi’s centuries-old link with the city needs to be taken into account. A deal could involve about 6,000 job cuts that would mostly be in Tuscany, according to people familiar with the matter.

The League’s leader Matteo Salvini joined the political outcry saying that Monte Paschi should not be sold below its value, and has been calling for the lender to become a local bank.

(Updates with bond move in the fourth paragraph.)