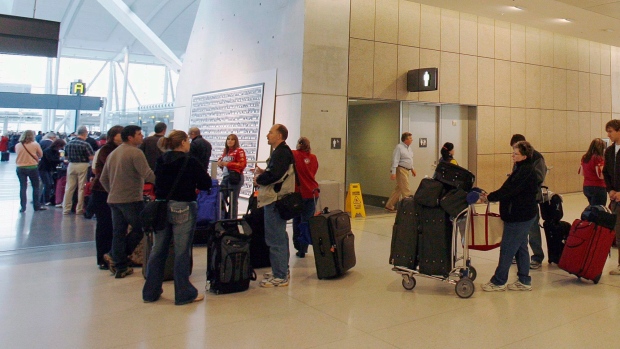 Passengers stand in a lineup running the length of the terminal at Pearson's Terminal one in Toronto Pearson Airport Pearson International Airport Toronto Airport YYZ , The Canadian Press

OTTAWA -- Airlines won't be allowed to bump passengers from a flight against their will under a new passenger bill of rights introduced today by Transportation Minister Marc Garneau.

That change is part of a package of amendments to the Canada Transportation Act which also introduces new foreign ownership limits for airlines, requires railways to install voice and video recorders in locomotives and improves transparency and efficiency in the freight rail industry.

Garneau promised the bill of rights last month in the wake of widespread alarm after a United Airlines passenger was seriously injured when he was dragged from a plane in Chicago.

The minister earlier told airlines operating in Canada such an incident is not to happen here, but he says his goal with the new legislation is to spell out clearly that a passenger who has purchased a ticket cannot be barred from a plane just because the airline sold too many seats.

"We have all heard recent news reports of shoddy treatment of air passengers," Garneau said at a news conference. "Such incidents will not be tolerated in Canada. When Canadians buy an airline ticket, they expect the airline to keep its part of the deal."

He said there will be minimum levels of compensation for people who voluntarily agree to be bumped from a flight and if airlines can't get a volunteer, they will have to decide if they want to up the ante to persuade someone to get off.

The bill will apply to airlines flying within, into or out of Canada.

Garneau said the existing rules for compensating passengers who agree to give up a seat or whose luggage gets lost or damaged are "opaque" to the average flyer and the new rules will make things more clear and let passengers know where to go to seek compensation.

The bill will enable the government to force airlines to create clear standards of treatment and compensation for circumstances such as voluntarily giving up a seat, lost or damaged luggage, delays while sitting on the tarmac and other non-weather related issues. Parents will not be forced to pay a fee in order to sit next to their children and even musical instruments will get better treatment under new standards for transporting them by air.

Most of the details will be established through regulation after the bill is passed.

The Canadian Transportation Agency will set minimum compensation and timelines. Passengers also will not have to seek out redress themselves, with the onus on airlines to keep records of those affected by an incident and follow up with those passengers accordingly.

Garneau said he is considering what further penalties would apply if airlines do not live up to the new requirements.

He wants the new legislation in place in 2018.

Gabor Lukacs, an air passenger rights advocate, is skeptical that the transportation agency is equipped to handle any more duties as it relates to airlines. A note posted on his Facebook page says the agency received more than 500 complaints a year from airline passengers over the last three years, but the agency's enforcement actions dropped in that time.

Garneau said new support will be provided to help the agency handle the increased workload.

The legislation increases the cap on foreign ownership of airlines to 49 per cent from 25 per cent. Garneau already made exceptions to this rule for some new, ultra-low-cost airlines trying to establish in Canada and the legislation will change it for all airlines, except for specialty air services such as fire fighting and heli-logging.