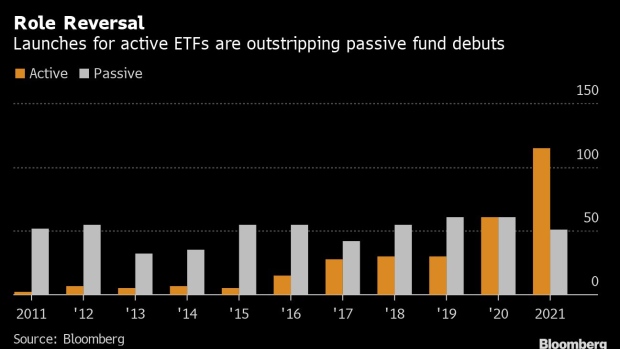 (Bloomberg) -- Not so long ago, actively managed ETFs were rare. Now they’re being created at twice the rate of their passive rivals.

That’s the first time active launches have ever outstripped passive, and it’s powering the $6.5 trillion ETF market toward its busiest 12 months on record.

It’s a comeback of sorts for stock pickers, and in an unlikely corner of Wall Street. Most active managers fail to beat their benchmarks net of fees -- a fact that has seen passive ETFs lure roughly $3 trillion over the past decade, while active funds gained only about $200 billion.

But a combination of new rules and the enduring popularity of ETFs with investors means a slow but major shift is underway.

The Emles Alpha Opportunities ETF (EOPS), which packages fast-money strategies in an exchange-traded wrapper, is one of the more recent active arrivals. It listed less than two weeks ago and already has about $66 million in assets.

Major rule changes in late 2019 paved the way for funds like EOPS. It became easier to deploy stock-picking strategies in an ETF, and new structures evolved that would help keep exact investment strategies hidden.

Active funds remain a small slice of the industry, and their assets make up just 3.4% of the overall ETF market. But that’s up from 2.7% a year ago. And in a sign the trend could continue, several large Wall Street firms who long held-out against ETFs are now embracing them.

Firms are also ramping up their thematic offerings, which invest according to compelling narratives like autonomous driving or sports betting.

A record 22 thematic funds have launched since the start of the year, including Wood’s $619 million ARK Space Exploration ETF (ARKX) and BlackRock Inc.’s $1.4 billion U.S. Carbon Transition Readiness ETF (LCTU), which set a record in April with the industry’s biggest-ever launch.

For many, the aim is to tap the boom in retail investing that has seen individuals grow to comprise more than 20% of equity trading participation, according to Bloomberg Intelligence.

“That’s really been a catalyst to help get some of these thematic ETFs off the ground quickly,” said Ben Slavin, head of ETFs for BNY Mellon Asset Servicing.

Although not technically classified as a thematic fund, the retail-friendly VanEck Vectors Social Sentiment ETF (BUZZ) made waves earlier this year when it launched with an endorsement from Barstool Sports Inc. founder Dave Portnoy.

The fund posted one of the best debuts in the industry’s history in March and currently has more than $243 million in assets.

As the new-arrival count surges, the number of exiting funds has plunged.

So far this year, only 19 ETFs have liquidated or delisted, according to data compiled by Bloomberg. That compares with 104 in the first half of 2020, and 79 during the same period in 2019.

Much of that endurance can be attributed to the bull market. Stocks have been repeatedly breaking records and cash has been flowing readily through the market. About 67% of U.S.-listed ETFs have taken in cash so far in 2021, according to Bloomberg Intelligence -- meaning issuers are less likely to pull the plug.

“There’s generally increased optimism as we come out of the pandemic, and people are more excited and feeling more optimistic about their business development,” said Amrita Nandakumar, president of Vident Investment Advisory. “Fundraising is easier in a bull market.”