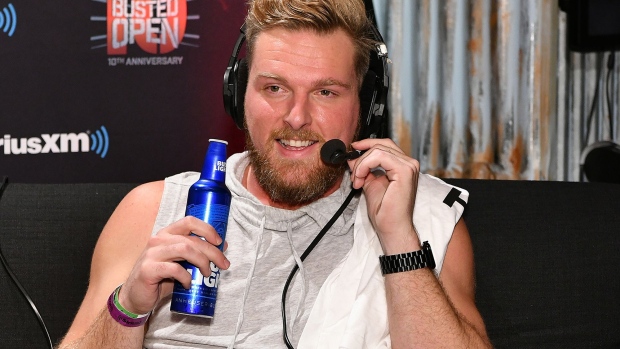 (Bloomberg) -- On Tuesday afternoon, Pat McAfee, a former NFL punter, stood behind the cluttered desk in his production studio in downtown Indianapolis and chewed over the zeitgeist of professional football with his usual gang of wisecracking co-hosts. For the next three hours, with the cameras rolling, the host of “The Pat McAfee Show” did his thing: a little mocking of the previous weekend’s losers, a quick imitation or two, a friendly interview with Packers superstar Aaron Rodgers and lots and lots of F-bombs.

It’s a formula that, while perhaps not ground-breaking, has suddenly turned McAfee into a rising star in a sports media landscape that is being rapidly transformed by legalized gambling. Since this past fall, the free-wheeling program, which airs live on YouTube during weekdays and is licensed by the satellite radio company SiriusXM, has risen to national prominence, thanks, in part, to weekly interviews with Rodgers that often make national news.

Last month, McAfee, who talks openly about betting on his show, struck a sponsorship deal with FanDuel, a division of Flutter Entertainment Plc, in which he will get paid $120 million over four years. Under the terms of the agreement, FanDuel will make special offers to McAfee’s listeners and its name will appear on a complex that will house his redesigned production studio. They will also team up to create new shows and live events.

During Tuesday’s episode, McAfee, 34, was wearing a gold necklace, a gold watch, jeans with holes in the knees and a black tank top. He is part of a new, younger generation of sports talk-show hosts who are thriving in the post-Trump era of the NFL, a moment shaped by the pressures of Covid-19, which feels less angrily political, more driven by gambling concerns and, to the extent possible, firmly rooted in caution-to-the-wind pandemic escapism.

To McAfee, the FanDuel deal is a validation of his overarching ethos that sports media should feel like more of a celebration. His show’s mission, he says, is to provide “a mental vacation,” a festive getaway from the real world.

“The incredibly talented people who have been covering sports for the past couple decades have viewed sports as if it’s politics or surgery or something very serious,” McAfee said. “If someone thinks to themselves, ‘I want to hear what Pat McAfee thinks about something serious,’ they’re idiots.”

McAfee grew up in Plum, Pennsylvania, a suburb of Pittsburgh. His father was a truck driver. His mother was a secretary. Throughout his childhood, McAfee was a devoted soccer player. Periodically, his parents would re-mortgage their 700-square-foot house so that they could afford to send him on travel teams. When other kids flew to tournaments, McAfee and his dad drove, sometimes for upwards of a dozen hours.

“There’s a natural will and grit that is built up through that,” McAfee said.

In high school, realizing he had a better shot at a lucrative career in the NFL than in professional soccer, McAfee started playing football. At one point, he desperately hoped to attend a kicking competition in Florida where college coaches would be gathered to scout new recruits. But his family didn’t have the money to send him. In a pinch, McAfee borrowed $100 from a friend and entered an underground poker game in the basement of a nearby Italian restaurant. Luck was on his side, and McAfee walked away with about $1,400, enough to pay for his trip to Florida. He went on to win the competition and the next day was offered a scholarship to play for West Virginia University.

In 2009, McAfee was picked in the seventh round of the NFL Draft by the Colts. The following year, at the age of 23, he was caught swimming drunkenly in an Indianapolis canal and arrested for public intoxication. The Colts suspended him for one game.

In the years that followed, McAfee emerged as one of the best punters in the league, flamboyant and fearless. In one famous moment, McAfee laid out a Broncos kick returner with a bruising tackle. The resulting video has since been viewed on YouTube over 160,000 times.

Off the field, McAfee increasingly channeled his comedic instincts onto Twitter, where he has amassed more than 2 million followers. In 2014, McAfee tweeted a photo from the Colts locker room that accidentally included in the background a naked glimpse of the team’s quarterback, Andrew Luck. Unamused, the Colts hit McAfee with a significant fine.

It did little to deter McAfee from the media spotlight. During his time on the Colts, he began appearing as a guest on the “The Bob & Tom Show,” a comedy-focused radio program based in Indianapolis that is syndicated in over 100 markets. When it came to relating to an audience, said co-host Tom Griswold, McAfee was a natural. In 2015, Griswold asked McAfee to appear on a comedy show in front of about 1,000 people at Butler University.

“He gets out there and tells a couple of great stories, and the crowd goes nuts,” Griswold said. “He’s just got that gift.”

Before long, his Colts teammates also sensed that McAfee was destined for a career in entertainment. Darius Butler, the former Colts defensive back, says that whenever McAfee spoke up, the team’s stars got quiet and listened. “If you can captivate a locker room full of professionals like that, you can do it anywhere,” Butler said.

“He’s really funny,” said former Colts linebacker Robert Mathis. “He can retain information and spin it in a way that makes people laugh and feel good.”

In 2017, at age 29, coming off of his second Pro Bowl, McAfee was feeling increasingly ambivalent about his future in the NFL. He was facing a third knee surgery in four years and was squabbling with the team’s general manager. He was ready to try something new. During an appearance on Comedy Central he announced his retirement and eventually forfeited the roughly $6 million remaining on the final two years of his contract.

At first, TV networks showed little interest in him, said McAfee, and he planned to create his own app where he’d post content for his fans. Then Barstool Sports founder Dave Portnoy and CEO Erika Nardini caught wind of his plans and offered him a job. McAfee threw himself headlong into the business of digital media, creating podcasts and videos for the site.

After about 18 months, he left Barstool Sports to start his own company, employing a pack of friends he affectionately calls “The Boys,” many of whom he’s known since childhood. Phil Mains, the company’s chief financial officer, has been pals with McAfee since kindergarten.

While building up his own independent media company, McAfee began contributing regularly to major sports outlets. He appeared briefly on Fox’s football broadcasts and then joined ESPN as a college football analyst. One day, during a telecast before the Oklahoma-Baylor game, McAfee stood on a boat and told viewers that “the last time I allegedly did what I’m about to do, I ended up in a jail cell.” He then did a bellyflop into the river.

To this day, McAfee, a wrestling fanatic since childhood, moonlights as an analyst for World Wrestling Entertainment Inc.’s  “Friday Night SmackDown” on Fox. It’s a good culture fit.

“Pat is a singular talent,” WWE President Nick Khan said. “There is no one like him.”

With his TV profile growing, McAfee continued to host his own daily talk show on YouTube, which he recorded occasionally from the back of a box truck that traveled with him while he appeared on ESPN’s college football broadcasts.

“I said ‘yes’ to everything because I was never given an opportunity before,” McAfee said. “It was incredibly exhausting.”

Over time, his company kept growing. In addition to his daily show, he created a network of podcasts, including gambling and hockey shows that are hosted by his friends.

These days, Pat McAfee Inc. is profitable. It has 13 employees who cut the show into clips for social media, edit the podcasts, come up with concept ideas for the show and advertisers, and banter with McAfee while he’s on the air. Sponsors include SeatGeek, a ticketing platform; Roman, a men’s healthcare company; Manscaped, a men’s grooming business; and 5-hour Energy. Currently, “The Pat McAfee Show” gets between 6 million and 9 million unique visitors a month on YouTube, plus listeners on SiriusXM. McAfee argues that the size of any audience in media is misleading and irrelevant.

“The only thing you can go off these days is who has influence,” he said.

In the fall of 2021, McAfee’s influence reached new heights following an interview with Green Bay’s Rodgers, during which the Packers quarterback confirmed that he wasn’t vaccinated (he had previously told reporters that he was “immunized”) and had consulted with the podcaster and vaccine skeptic Joe Rogan. A public-health uproar ensued. But through it all, McAfee’s convivial relationship with Rodgers survived unscathed.

On Tuesday, just four days before his looming playoff game against the San Francisco 49ers, Rodgers took a break from his intense preparations to make yet another weekly appearance on McAfee’s show. For the next 15 minutes, Rodgers gamely talked about the NFL playoffs with McAfee and his co-host A.J. Hawk, an ex- NFL linebacker, and reeled off a couple of old football war stories. Eventually, the conversation got around to the big question about the quarterback’s little toe. How was it feeling?

Last fall, people had been speculating in the media that Rodgers’ lingering toe injury might be a complication stemming from his earlier bout of Covid-19—a diagnosis Rodgers strongly rejected.

Now McAfee jokingly asked if Rodgers had consulted “Dr. Joe Rogan” about the discomfort and asked with mock seriousness how the injury had really occurred. Perhaps on a walk to the bathroom in the middle of the night?

“Will we ever know how it happened?” McAfee asked.

Rodgers responded that his injury was “not Covid toe,” but didn’t elaborate. He added that he was “as close to 100% as I’m going to get.”

If the answer was evasive, it was also enough to generate a fresh wave of headlines across the NFL landscape. For anyone considering a bet on Saturday’s game at Lambeau Field, the update on Rodgers’s pinky toe was actionable intelligence—all, very NFL 2022.

With McAfee’s stature on the rise, there’s also been plenty of chatter about his future plans. Recently, he said on his show that he’s had conversations with Amazon.com Inc. The e-commerce giant is planning to create daily sports programming, according to the New York Post. But so far McAfee has been mum about the specifics of the talks, and Amazon declined to comment.

In a statement, ESPN called McAfee “a talented and entertaining commentator” and noted that “we would certainly be interested in finding opportunities to work with him again in the future.”

To McAfee, the journey from the town of Plum to the center of sports media and gambling is enough to make his head spin.

“I have experiences in the sports world that not a lot of people will get to experience and I never forgot how awesome they were,” McAfee said. “There wasn’t ever a moment where I was like, ‘This is supposed to happen.’ My entire life I’ve been like, ‘This is ridiculous. I should not be here.’”