Wealthy are driving home prices up but will feel economic pain as crisis drags on: CIBC's Tal

The governor of the Bank of Canada said managing the financial risk from the COVID-19 pandemic is more critical than ever, while the central bank is paying close attention to the housing market amid an historically low interest rate environment.

“We will also watch for signs that housing markets are being driven higher by speculation that prices will keep rising,” Tiff Macklem said in a speech Thursday. “And we will watch whether people buying houses are taking on outsized debt relative to their income.”

“But if too many Canadian households start to become dangerously over-leveraged, policy-makers have several macroprudential tools they can use. Our experience with the mortgage-interest stress test shows how effective these tools can be.”

Companies and households have been given a financial lifeline during the pandemic, including deferrals on mortgage payments, a drop in the central bank's key policy rate, and billions in federal aid and credit programs.

But the measures taken over the past few months to keep credit flowing to companies and households, for example, and reduce economic risk, may actually introduce risk in the coming months.

In a speech to the Global Risk Institute, he warned of strains on household and business debt that may grow as credit provides a financial bridge over the pandemic.

Low interest rates could heat up the housing market, which was already getting attention from policy-makers prior to the pandemic. And historic federal spending will plunge the national debt further.

Even the bank's vow to keep its key policy rate at 0.25 per cent until a recovery is well underway would create vulnerabilities in the financial system.

“Without the fiscal and monetary policy actions, the economic devastation of the pandemic could have been much, much worse,” Macklem said in his speech.

“As much as a bold policy response was needed, it will inevitably make the economy and financial system more vulnerable to economic shocks down the road.”

Macklem said the bank will keep a close eye on how many companies and households can't keep up with debt and mortgage payments, as well as the pace of the housing market. He suggested that the government could tighten the mortgage stress-test if the housing market became too hot.

CIBC senior economist Royce Mendes said Macklem's mention of the stress test was telling because he made no mention of adjusting the bank's monetary policy in response.

“That statement should reinforce the view that the Bank of Canada will keep their administered rate pinned down for the next few years, even if that policy contributes to increasing vulnerabilities,” he wrote in a note.

“In that case, the bank would look to other policy-makers to contain any growing risks, given that raising rates prematurely would also stunt the recovery.”

The speech comes as the country heads into an expected second wave of COVID-19, with case counts rising and the threat of lockdowns looming over businesses and workers.

The Canadian Federation of Independent Business said Thursday that just over half its member small businesses didn't believe they could easily survive another round of forced closures.

“Nobody wants to return to lockdown,” Macklem said, “but a second wave could test our resolve to practise physical distancing and keep the pandemic from spreading uncontrollably again.” 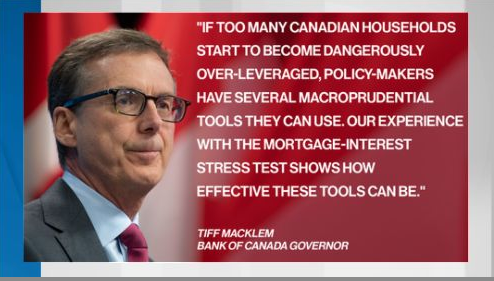 Widespread lockdowns in March and April led to historic plunges in the labour market, with three million people out of work and 2.5 million more working less than half their normal hours.

The country has recouped about two-thirds of the jobs lost with more gains expected when Statistics Canada reports Friday on September employment figures.

Financial data firm Refinitiv said the average economist estimate is for a gain of 156,600 jobs in September and an unemployment rate of 9.7 per cent, down from the 10.2 per cent recorded in August.

Macklem said it will be a long time before the losses in jobs and work hours return to pre-pandemic levels, requiring a solid risk-management strategy.

“The COVID-19 pandemic has made it painfully clear that how well we mange risks has a huge impact on our well-being,” Macklem said.

“Globally, I don't think it's an exaggeration to say that the quality of risk management will increasingly influence the success and stability of societies.”

But it's not the only risk Macklem warned about, pointing to the long-term impacts climate change will have on the financial system and domestic economy.

Left unchecked, the risks from climate change could lead to heavy losses for financial institutions or threaten the stability of the country's financial system, he said.